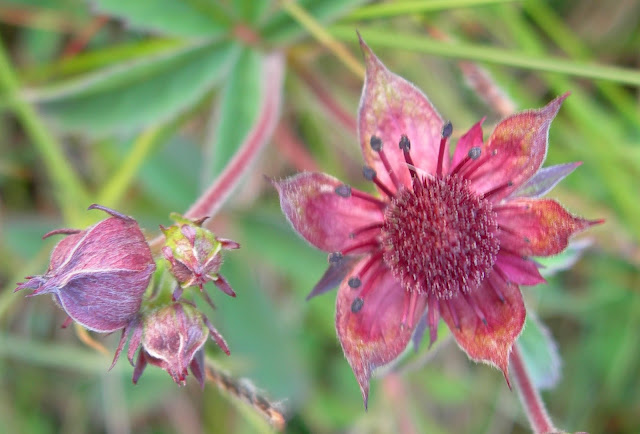 The disk Martin Summers gave to the Diary contained images of some of the more unusual flowers found across West Ardnamurchan.  All of the flowers that follow are ones the Diary has yet to find.

This is marsh cinqfoil, Potentilla palustris, a plant found in boggy, peaty land, which it brightens with its lovely magenta colours.  It can grow quite big, up to 18". 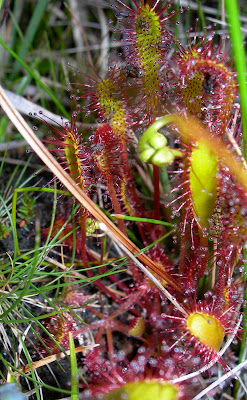 This is either the oblong-leaved or the great sundew - the two are very similar.  The leaves secrete a sticky liquid at the end of each hair.  Insects, attracted by a sugary scent secreted from special glands, land on the leaf causing the hairs to fold in towards it, trapping it. The whole leaf then rolls up and secretes more 'mucilage' to begin the process of breaking the insect down.

When the insect is digested, only the hard chitinous exoskeleton remains.  Although the plant obtains some nitrogen from this process, it also has roots: the insect meal is a 'dietary supplement'! 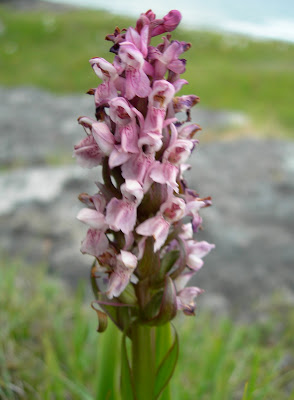 Long-time readers of The Diary will know of its passion for Ardnamurchan's orchids.  Well aware that it has only found four of the local orchids, it presents Martin's pictures of two other species with some envy.

This first is an early marsh orchid, Dactylorhiza incarnata, which prefers damp grassland and, locally, the lime-rich, sandy soil of the machair. 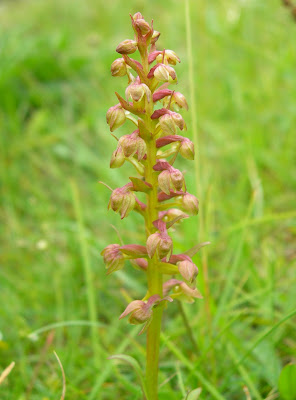 This is the frog orchid, Dactylorhiza viridis, a plant which the Diary has spent many unhappy hours searching for in the Sanna area without success.  Part of the reason for it being so hard to find is that it's small, 15cm high at most, and its ability to blend in to the local grassland.


Many thanks indeed to Martin for the pictures.
Posted by Jon at 06:00