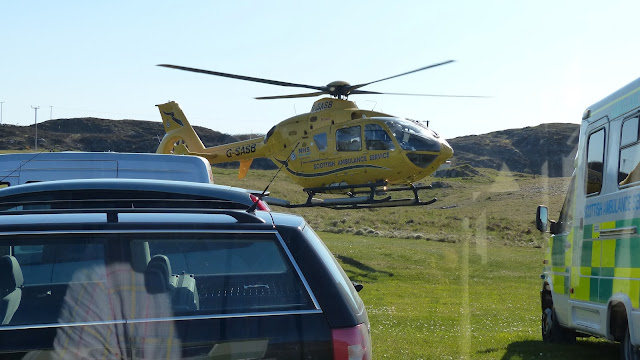 The Emergency Responder team, which was set up by the Scottish Ambulance Service just over a year ago to cover 999 call-outs on West Ardnamurchan, is just over a year old. In that time the four team members have responded to over forty emergencies, and have established an enviable record of efficient, rapid and caring service.

Phil and Rowan Wheatman have written to the Diary with the following account of a recent incident:

"On Wednesday 28th May we had reason to call the ambulance services to a friend who had become unwell at Carraig and I wondered if, through The Kilchoan Diary, we could relay our thanks to all who helped and say how well the service worked.
"We have a caravan on the Carraig site and were visiting for a few days with our friends Tom and Alyson. On Wednesday afternoon we were walking on Bay McNeil when Tom collapsed. Initially holidaymakers on the beach rushed to Tom's aid, even suggesting making a stretcher from a windbreak! 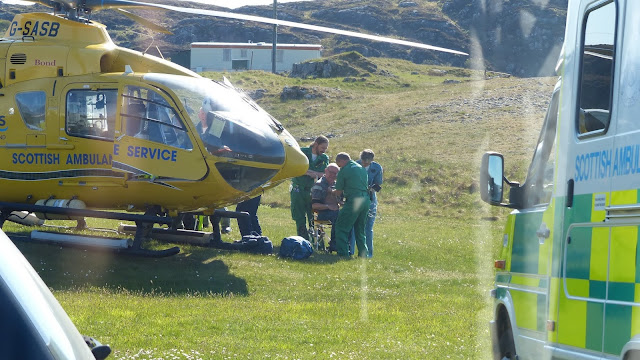 "I made a 999 call from the payphone  on site and within about 15 minutes Jessie arrived followed not long after by Karen from Glenborrodale.  They attached monitors etc to Tom (who by this time was back at the caravan) until the ambulance from Strontian arrived. After consulting with Jessie and Karen the crew decided to request an air ambulance which duly arrived and whisked Tom to hospital in Glasgow.

"From the arrival of Jessie in double-quick time to the departure of the helicopter all the medical staff worked together seamlessly and it is a credit to the system that the people of West Ardnamurchan have campaigned to set up over the last few years. Jessie even phoned Alyson the next day to see how Tom was getting on! Tom was discharged the next day and is now back home in the Lake District.
"The essence of our thoughts are firstly to thank all concerned - the people on the beach, Jessie and Karen, and the ambulance/air ambulance crews, and to wholeheartedly say that the system which WACC and others campaigned for works!"


Many thanks to Phil & Rowan Wheatman for story and pictures.
Posted by Jon at 09:14