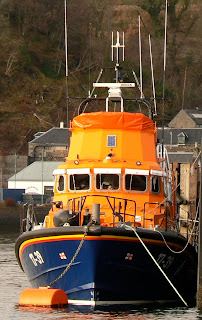 Tobermory's current lifeboat is the Elizabeth Fairlie Ramsey, an all-weather, self-righting boat of the Severn Class, a design introduced in 1995. As far as Ardnamurchan is concerned, she tends to deal with problems along our south coast and as far round as Fascadale on the north coast, beyond which the Mallaig lifeboat can respond more quickly. With a range of 250 nautical miles and a crew of six, she has an impressive top speed of 25 knots. 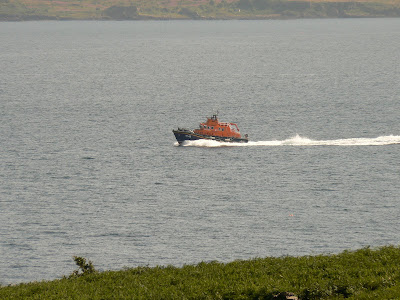 As with almost all Britain's lifeboats, she is operated by the Royal National Lifeboat Institution, which was set up in Victorian times when loss of life round Britain's coasts had become a scandal. Despite the fact that it offers such a vital service, the RNLI is a charity, surviving entirely upon gifts from the general public. This doesn't mean that the equipment or training offered to the volunteer crews is anything less than first class: the RNLI is famous for the service it offers, and holds a place of very special affection in the hearts of the British people.
Despite its independence from government, RNLI boats are only launched when requested by a government agency, the Coastguard. So, a lifeboat is called out in the same way as police or ambulance, by dialling 999 and asking for Coastguard. 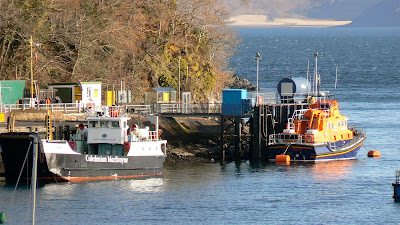