Although Ardnamurchan is a peninsula, visitors can be forgiven for thinking of it as an island. This happens when they have accessed it from the south, along the A82 from Crianlarich, and therefore cross Loch Linnhe onto the peninsula by ferry at the Corran Narrows. In fact, most people going to and from Fort William tend to use Corran as, even though there is a road route to Fort William to the north, via Lochailort, the Corran route is quicker. 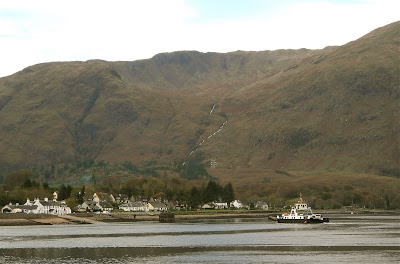 The Corran crossing is serviced by two ferries, the older Maid of Glencoul and the larger and newer Corran, run by Highland Council. Corran does most of the work, particularly in summer when the route is busy, with the Maid moored nearby as a back-up. The crossings are half-hourly, except first thing in the morning and last thing at night. The crossing itself is quick, not more than four minutes, so, when queues build up, the ferry shuttles. 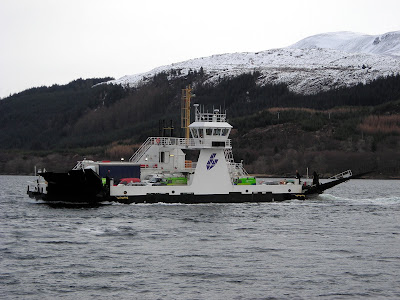 The narrows were formed by the glacier which gouged out the Great Glen and the trough now occupied by Loch Linnhe. At the end of the last ice age, when the glacier was retreating up its valley, its snout - the point where it melted - stopped for a time at Corran. At this point the ice, being lighter than the sea water into which it was flowing, lifted off the bottom, leaving an underwater ridge. There are many other examples of this feature, the other well-known local one being at the Connel Bridge near Oban, where the outgoing tide flows over the ridge to form the Falls of Lara.
In the same way as at Connel, high and low water at spring tides cause the sea to rush through the Corran Narrows. This, when combined with high winds, can cause ferry sailings to be cancelled. It's at such times that we really appreciate the ferry: for anyone coming up the A82, the northern route to Kilchoan, via Lochailort, adds an good hour to the journey.
The ferry timetable is here.
Posted by Jon at 10:00