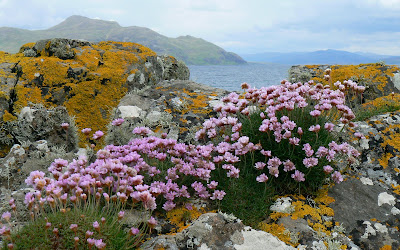 In places along the coast at this time of year, where the blue sea ends a sea of pink begins: the thrift is in full bloom along the cliffs. 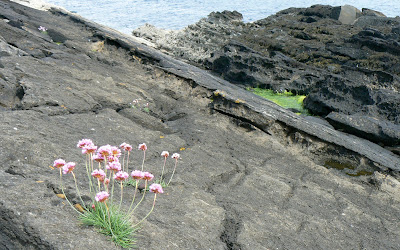 Its little cushions of leaves seem to grow on the most barren, exposed rock, clinging to small cracks within inches of the high-tide mark. It seems impossible that it can find any nutrients, and even less likely that it can survive, year after year, in places which are beaten by the winter gales. Yet, come the early summer, it puts out masses of its little clusters of flowers, and produces enough pollen to make itself popular with insects, particularly bumble bees. 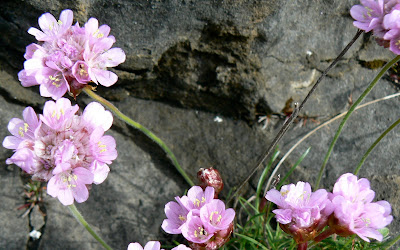 The plant is also known as Sea Pink, Cliff Clover or Ladies' Cushion and, in parts of Scotland and northern England, Heugh Daisy, heugh meaning cliff. 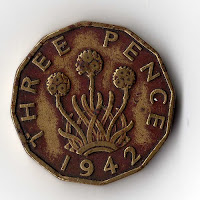 In folklore, it is said that the owner of any garden with thrift in it will never be poor. Perhaps this is why a cushion of thrift in flower was depicted on the obverse of the old threepenny bit.
Many thanks to Smabz Sputzer on Flickr for the image of the threepenny bit.
Posted by Jon at 17:12