A Walk to the West of Fascadale 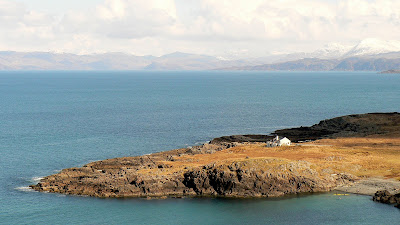 It is possible to walk the whole, beautiful north coast from Portuairk to the Singing Sands, but one of our favourite section lies just to the west of Fascadale. From Fascadale - the name is derived from the Norse, aska, ship, and dahl, dale - a path is clearly marked on the OS map leading slightly inland, although a more impressive but rougher route follows the top of the cliffs. This is a wonderful walk from which to spot whales in the Minch, but it is also where we saw our first sea eagle, probably a visitor from Rhum.
When we last walked this way, all of it across Ardnamurchan Estate land, we strayed south, climbing steadily along the flanks of Meall an Fhir-eoin, Eagle Hill. Just off the marked path stands this pile of boulders. 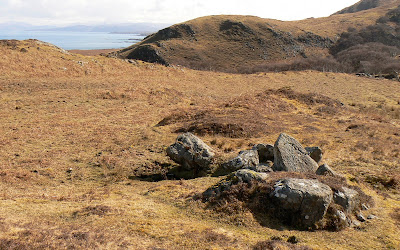 It is very difficult for someone without the expertise to be certain, but their arrangement is strikingly similar to the chambered cairn at the back of Ormsaigmore called Greadal Fhinn. That is supposed to have been the burial site for a Viking chief, so it would not be surprising to find a similar chamber in another place with a Viking name.

A walker on this route would be unlucky to traverse it without spotting wildlife. We saw a large herd of hinds which we were able to approach without disturbing them, and a raven that had been feasting at the bloated carcass of one of the Estate's cattle.
We passed two lochans, Lochan Dubh, the Black Lochan, a shallow, elongate little lake in flat land beside the marked path, but the highlight of our walk was this one, Lochan an Dobhrain, the Otter's Lochan. 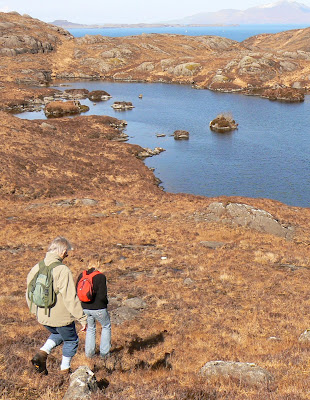 In fact, I would describe this enclosed sheet of water as the prettiest lochan on Western Ardnamurchan, in part because of its seclusion in a cup-shaped depression in forbidding hills, but also because of its numerous little islands and bays. The photograph was taken in the late winter, so the place will be even more beautiful come the warm weather and the flowering of the heather.
A map of the route is here.
Posted by Jon at 18:00