Locan na Crannaig lies in a wide, marshy valley to the west of, and close to the Kilchoan to Achosnich road. 'Crannaig' suggests that the lochan was named after a crannog (Gaelic crannag), an island or wooden pier-like structure on which a dwelling was built. The structure of some, like the one in Loch Tay, resembles a Victorian pier, a platform raised on wooden piles built over the water with a walk-way connecting it to the land. In others, the settlement was on a natural or man-made island.
Crannogs date from about 4,500 BC in Ireland, the earliest Scottish dates being around 3,000 BC, during the Neolithic, but they were used for many centuries, through the Iron Age to Mediaeval times, when they were often the homes of important people. 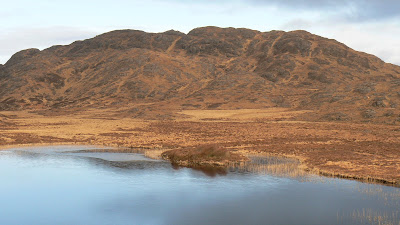 This photograph, taken from the road shortly after it passes Kilchoan's New Cemetery, looks across Lochan na Crannaig to Beinn na h-Imeilte. The 'crannog' is clearly visible on the far side, covered with heather and small bushes.
In the photo below, taken from the west, the 'crannog' can be seen to be connected to the land by a neck of low, marshy ground. In the days when it was used, this may have been dug out to form a ditch. One reason for the building of crannogs was that they offered good defensive sites. 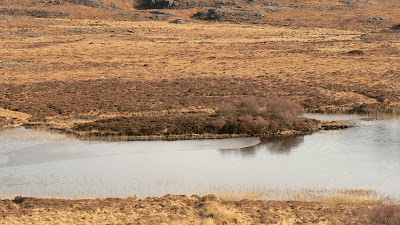 The area to the right on the 'crannog' is covered with bushes. Amongst these are loose blocks of rock which may have formed one or more small dwellings. At the south end of the 'crannog', at the waterline, is an outcrop of solid rock, proving that the feature is natural rather than man-made. To the north of the 'crannog there is another mound with rocks scattered on it. 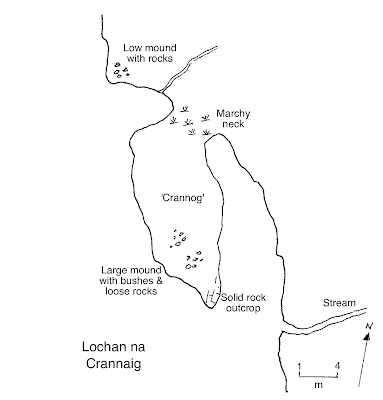 Whether this site was a crannog isn't proved as no excavations have taken place. But, from the evidence visible on the ground, there's a good chance that it was.
Posted by Jon at 23:45