In Search of a Battlefield - 6 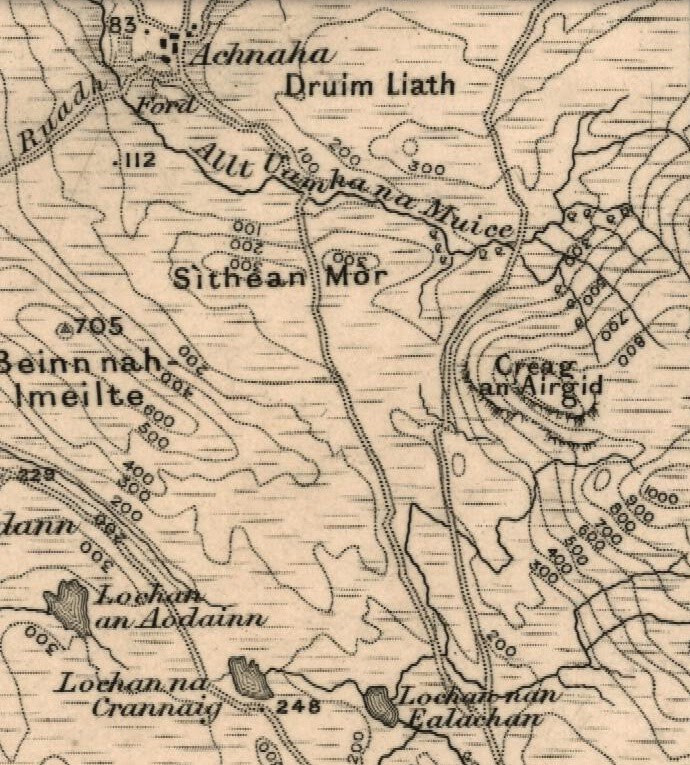 The last Diary post which addressed the continuing mystery of the site of the Battle of Creag an Airgid, silver hill, which took place in 1518 or 1519, was almost a year ago - link here - and addressed the problem of locating the cairns raised, after the battle, one over the bodies of the MacIain chief and his two sons, the other over those of their men.  Locating them depends on accounts which refer to the route of the Sanna road. In that last post it stated, "In our searches we have made a fundamental mistake - assuming that the Sanna road followed the same route in MEM MacDonald's day as it does today. It doesn't."

In that post, I used the 1872 OS map, but the clipping above is taken from the 1885 1" Coll sheet, which shows the contours.  Using it, the old tracks to Sanna (green) and Glendrian (orange) could be superimposed on a recent OS-derived map: 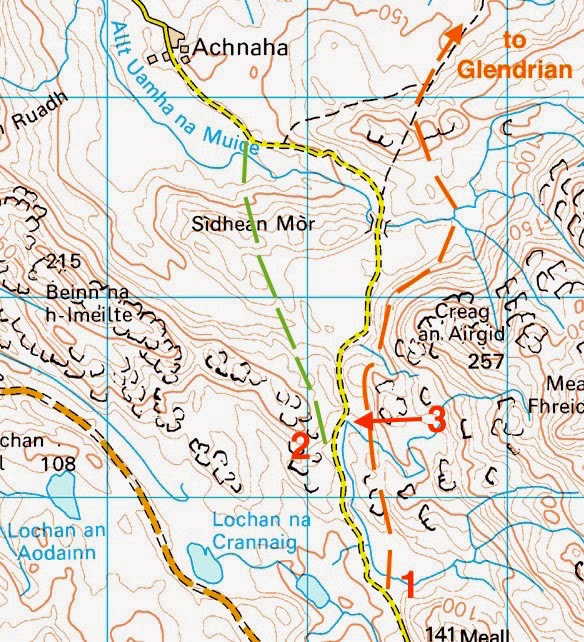 It being a truly dismal day today, with the rain washing across Ardnamurchan and the hills resembling quagmires, we took a walk along the modern Sanna road to try to identify points 1 and 2, where the old tracks diverged to Glendrian and Sanna respectively. 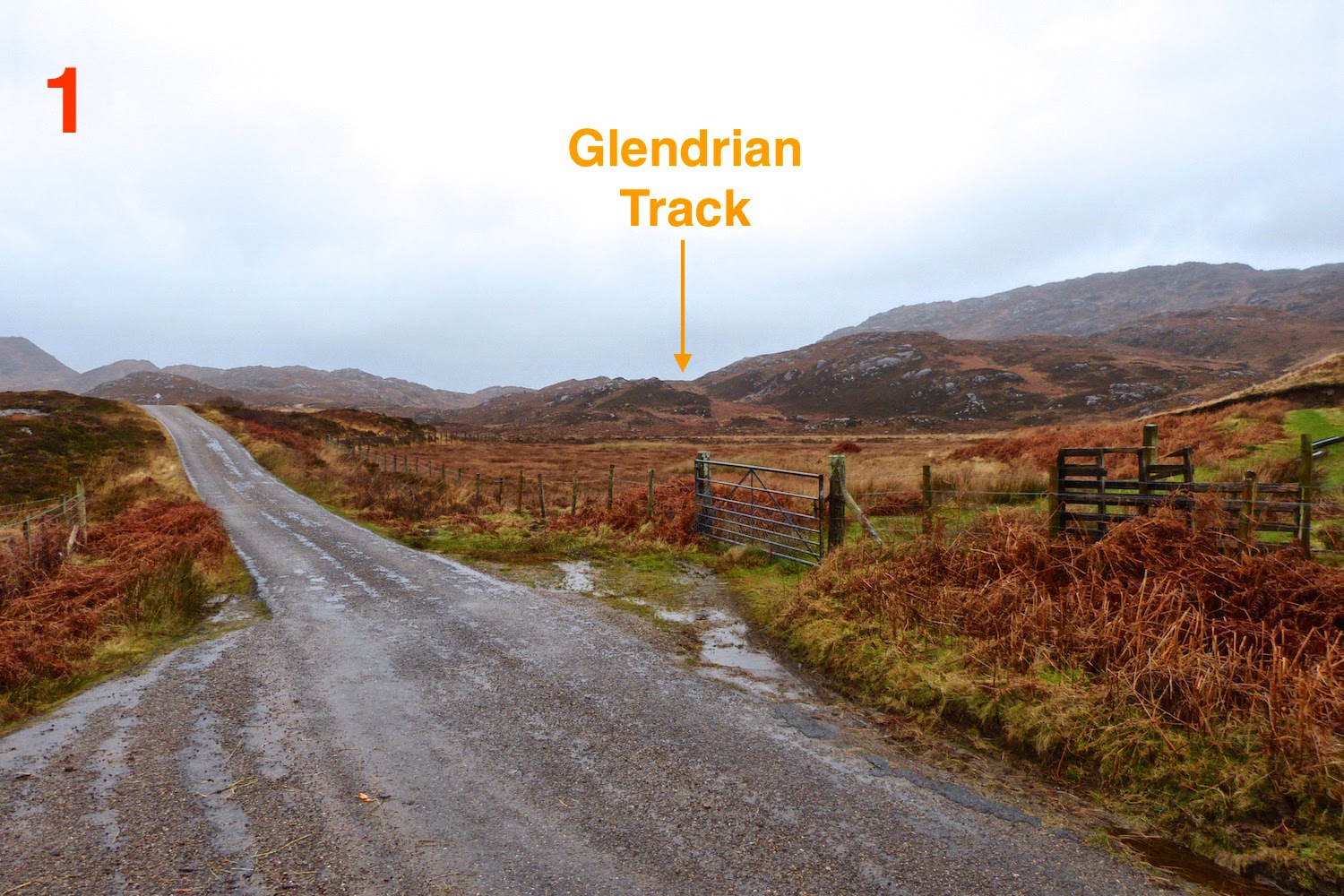 Point 1 was easy to find as it lies immediately to the east of the southern end of Lochan an Ealachan, the lochan of swans, sadly no longer named on the modern maps.  The Glendrian track can be seen crossing a small marshy area beyond and then rising across the hill in the middle distance.  Given a finer day, we'll walk this. 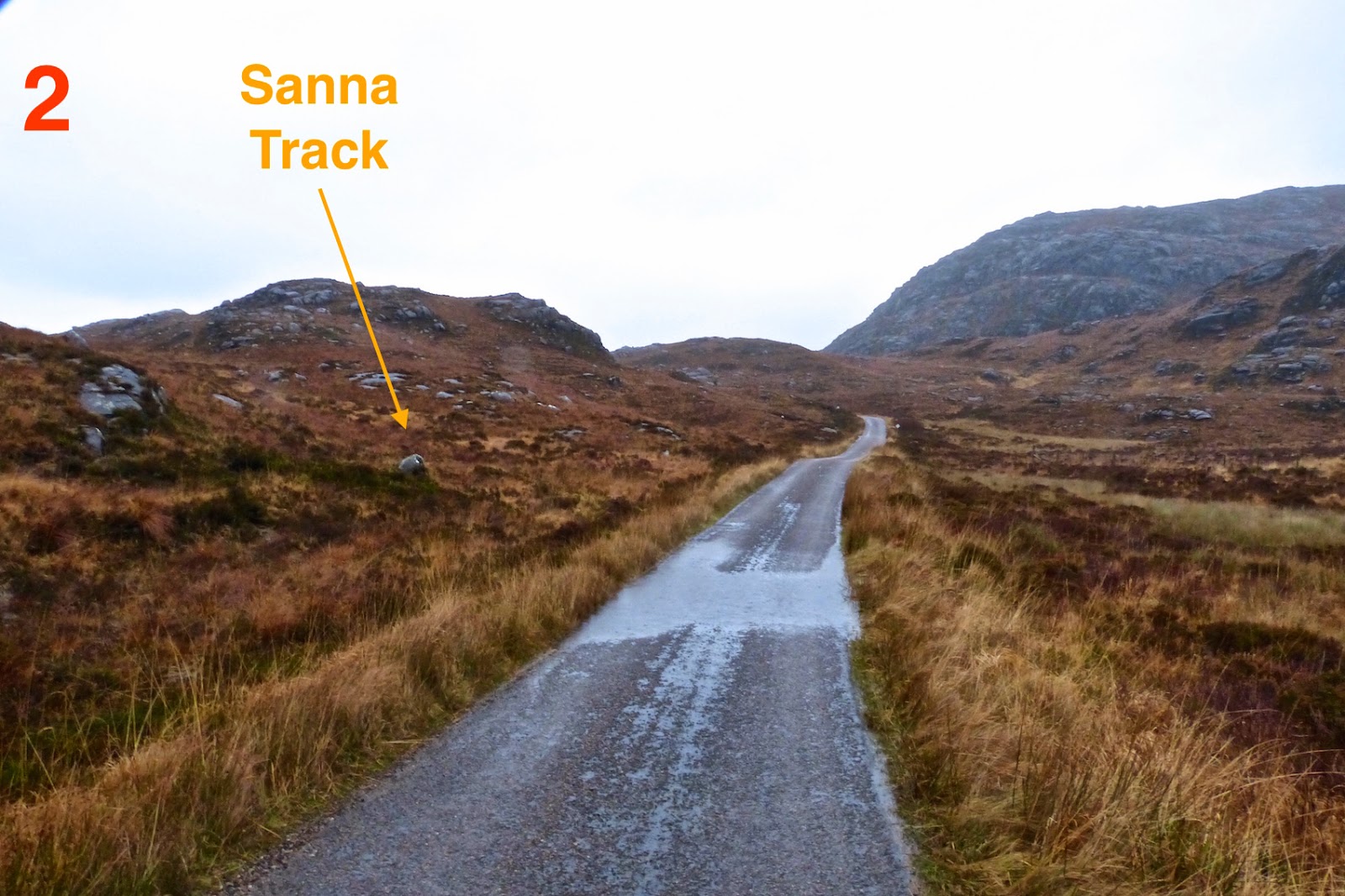 Point 2 was also easy to find as it lies immediately to the west of a very distinctive dog-leg in the course of a small burn - this is marked 3 on the second map.  The Sanna track leaves the present road and follows a small, open glen, heading much more directly for Achnaha. 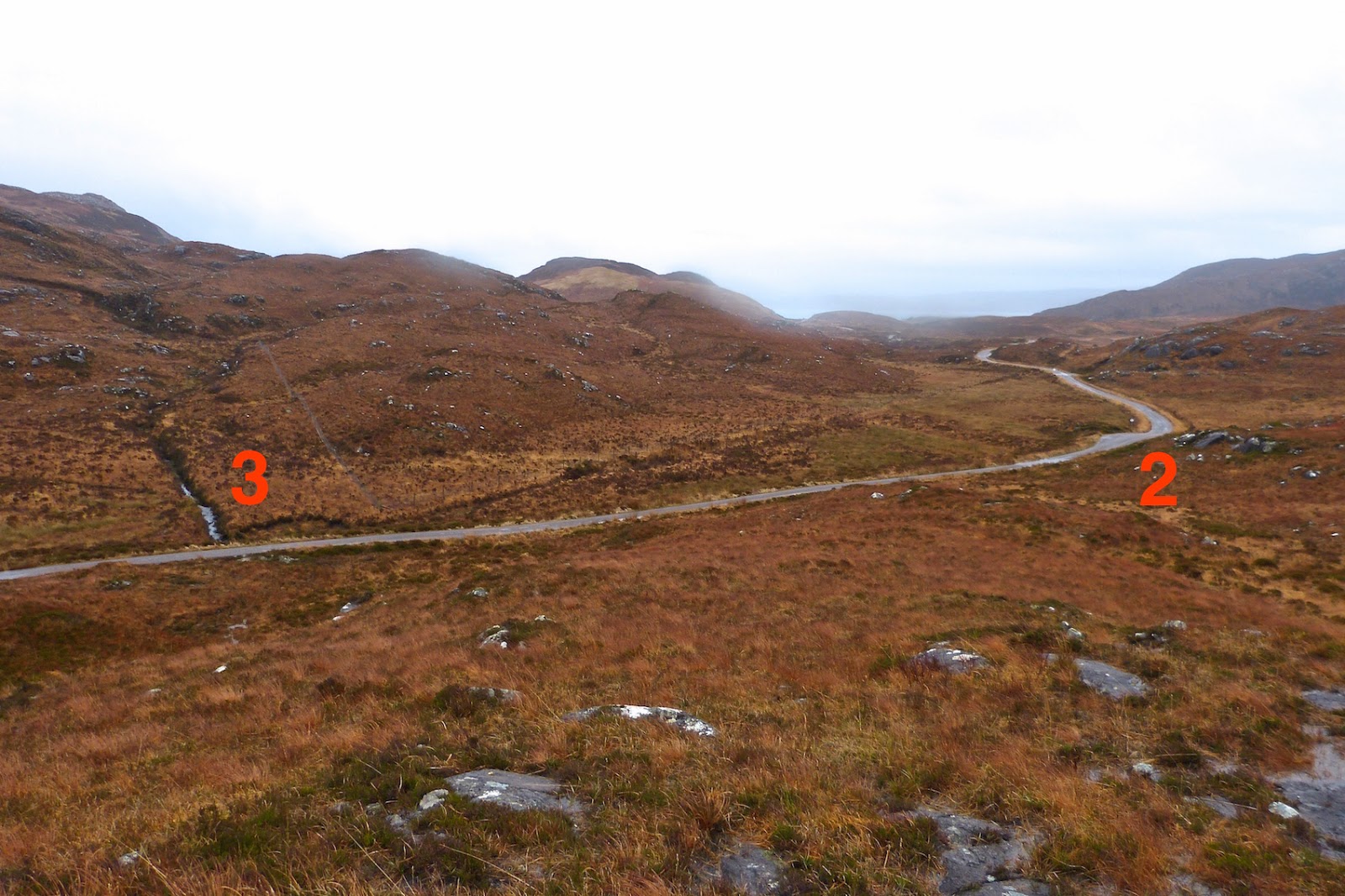 Looking back, this picture shows the points where the Sanna track leaves the present road, 2, and the very distinct V-shape of the burn, 3. 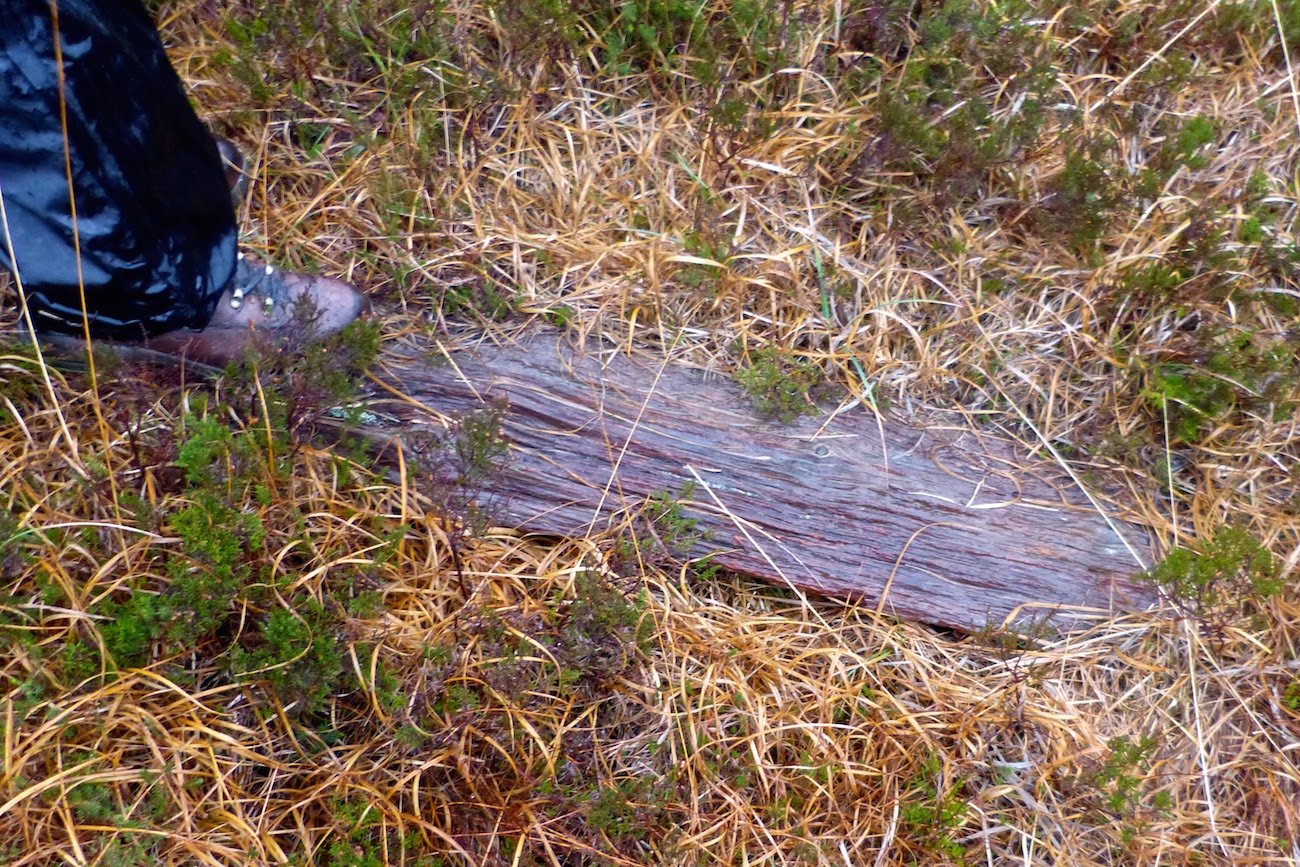 Despite the conditions, we set off up the hill to follow the Sanna track, and found this old plank, perhaps evidence that the route we were following is the correct one. 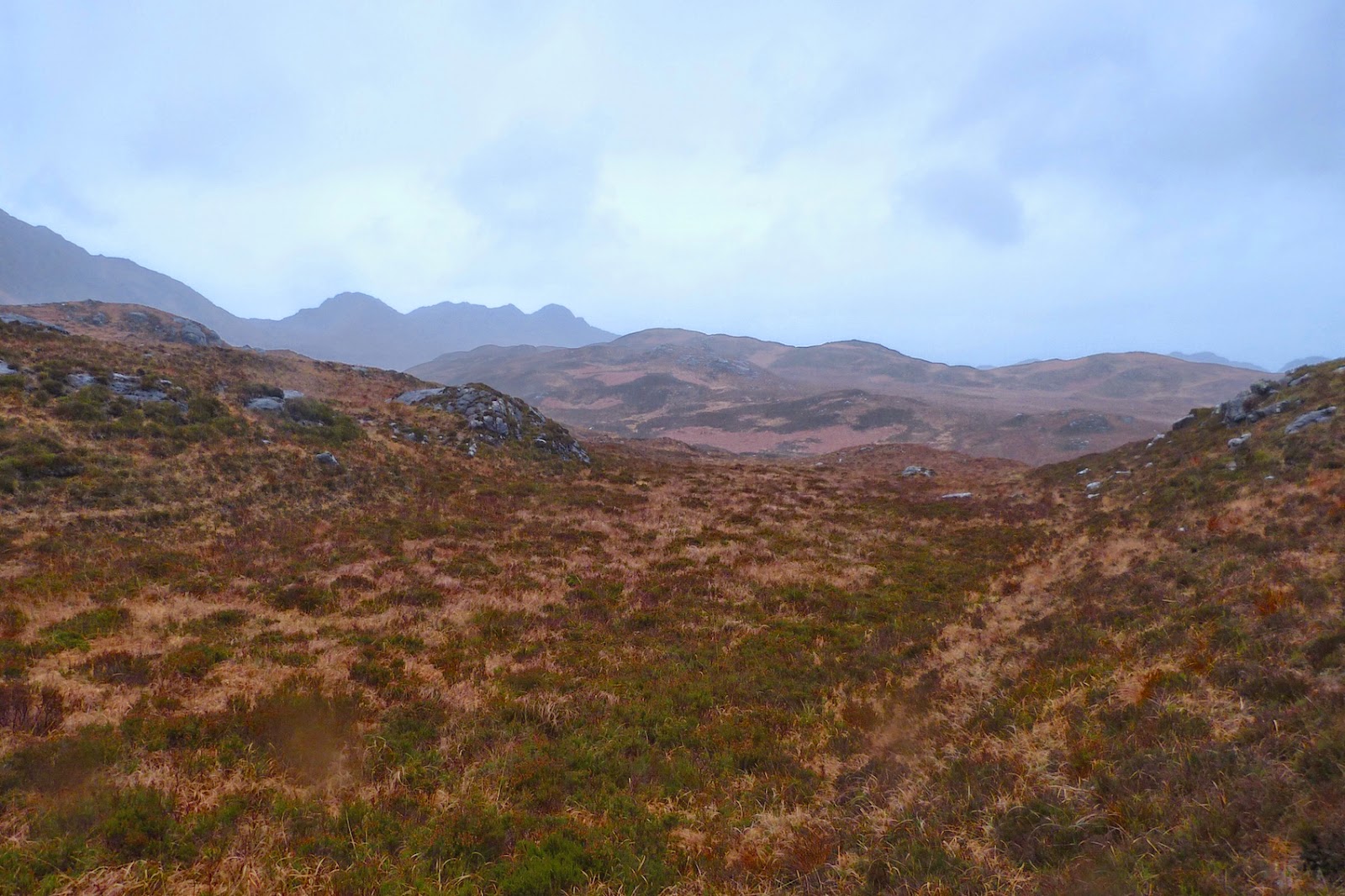 We stopped at the top of the rise where we came in sight of the steep glen into which the track drops and, in the middle distance, the ridge of Sithean Mor, over which it passes before rejoining the present Sanna road.  Again, now that we've found it, this track offers us another walk, this time back along the route which the invading MacDonalds and their MacLeod allies may have followed on their way to the battle site.
Posted by Jon at 15:27