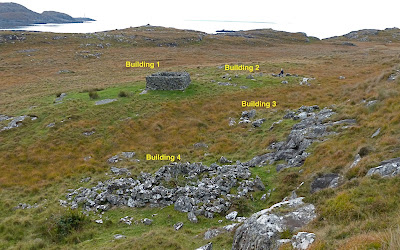 The four stone structures - see earlier post here - which form the possible abandoned settlement some 300 metres to the north of the bridge over the Sanna Burn are shown in this photograph.  They stand on a raised platform of land, close against the base of a ridge.  'Building 1' is in good condition but lacks a roof; 'Building 2' is the largest but, with 'Building 3', consists of the bases of their walls only, in the form of large stone blocks.  'Building 4' is by far the most complex but is in a state of ruin. 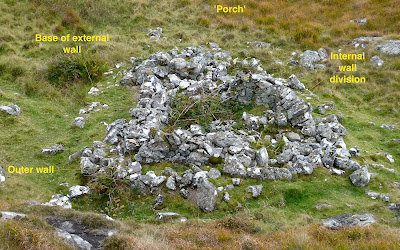 'Building 4' is the most interesting.  It sits on a small platform contained by an 'External wall'.  At top left of the picture, taken from the slope, this wall runs for some three metres beyond the end of the ruin, suggesting that it may have formed the base of the wall of an earlier building.  At bottom left, a short section of an 'Outer wall' follows the line of this 'External wall'.  Within the building there is a short wall which would have divided the single room.  At the far, south end a small annex was attached, which might have been a byre or a 'Porch'.  It's not clear where the door was. 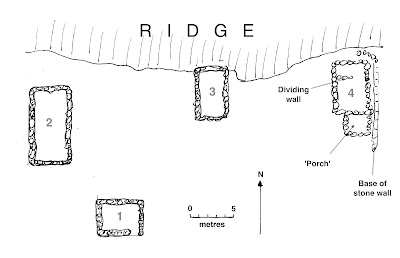 This map shows the settlement.  It's interesting that all three larger houses run almost north-south - there must be good reason for this.  The north wall of 'Building 3' is formed of a large rock which is 'in situ' in the base of the steep slope down from the ridge.

There is no sign of any of these buildings on any of the historical maps available from the National Library of Scotland.  This suggests that, if they were occupied, it was either for only a short time, for example, when the first families arrived following clearances to the east in the 1850s, or they were abandoned before the first of the accurate OS maps was drawn in 1872.  In contrast, one of the structures in the other settlement to the east, nearer Plocaig, is clearly marked on the 1872 map, connected to Plocaig by a track.
Posted by Jon at 15:46