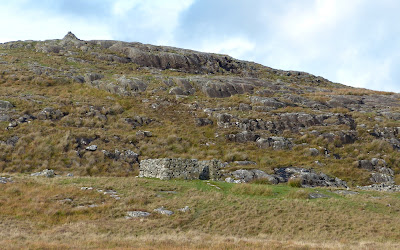 This square, well-built, stone-walled structure lies under a hill some 300m to the north of the bridge that spans the Sanna Burn.  We've walked past it many times and, if we did spare it much thought, probably decided it was some sort of byre for animals or, possibly, a shieling used by Sanna people in the days when the animals were taken away from the main village during the summer months. 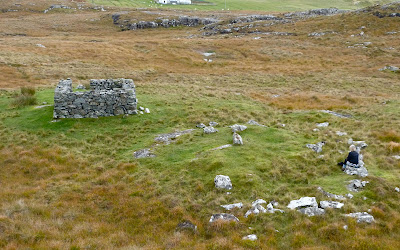 The other day we were descending the hill on our way back to Sanna when, for reasons that cannot be explained, our eyes opened.  The stone structure wasn't alone.  In the foreground of this picture is the skeleton of another, much bigger building.  All that remains on the platform upon which it was built are the very large stones which formed the base of walls that might originally have been of stone or turf. 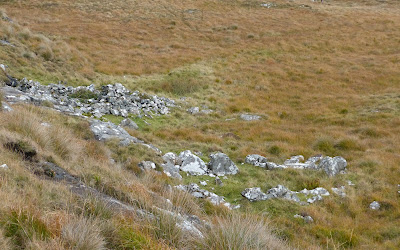 Intrigued, we began to cast around and quickly found two more buildings a few metres to the east and, like the other two, tucked in against the base of the ridge.  As little remains of the building in the foreground of this picture as the first we found, but the one beyond has stone walls which, although they have collapsed, must once have been substantial.

This same ridge against which these lie runs eastwards as far as Plocaig.  About 500m away, along the path that used to join the two villages, the ridge shelters other stone buildings of a similar size and shape, also ruined, described in a post earlier this year, here.  So, between Sanna and Plocaig there were once two other small settlements.
Posted by Jon at 16:57