In Search of a Battlefield - 5

Readers of the Diary will recall that one of our enduring searches is for the cairns which were raised over the bodies of those that fell at the Battle of Creag an Airgid in 1519.  The best evidence for their location, one raised over the bodies of the chief of the MacIain and his two sons, and a separate one over his followers, is on the Canmore site: "Though unable to find them, Donaldson (1930) states that cairns commemorating the battle lie somewhere in a hollow between two lines of hills on the right hand side of the road (travelling from Kilchoan to Sanna) beyond the second bridge before Craig an Airgid is reached."  'The Annals of the Parish' state that the chief's cairn is "near the old march dyke between Kilchoan and Glendrian farm." The Diary takes the word 'march' in the sense it is used in England, as a boundary between two areas.  Finally, Donald MacDiarmid, in his 'Ardnamurchan Place Names', says that the site of the cairn 'can yet be identified on a knoll close under the south-west side of Creag an Airgid', and that the followers' grave is 'at a place which can also be pointed out'.

In our searches we have made a fundamental mistake - assuming that the Sanna road followed the same route in MEM MacDonald's day as it does today.  It doesn't. 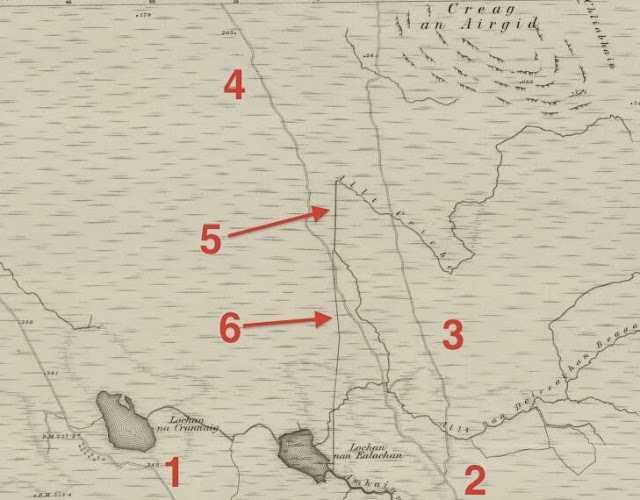 This clipping is taken from the 1872 OS 6" map, to be found on the NLS site here. 1 is the Sonachan and Portuairk road, passing to the west of Lochan na Crannaig.  2 is the Sanna road - but it branches.  3 is the route the road follows today, passing close below Creag an Airgid and proceeding to Glendrian.  4 is the route of the old Sanna road, considerably to the west of the present road.  5 is a straightened section of the Allt Criche, while 6 is an old wall, possibly the 'march dyke' referred to by MEM Donaldson.  While the OS map doesn't show any bridges, the road will have crossed the Millburn to the south of the map, so the crossing of the Allt nan Doireacheann Beaga on the map would have been the second.

There is a remaining problem: MEM Donaldson states that the burial cairns are 'in a hollow' while Donald MacDiarmid states that they are 'on a knoll'.

With all this in mind, the Diary, having apparently been searching too close to Creag an Airgid, set out once again to find the cairns. 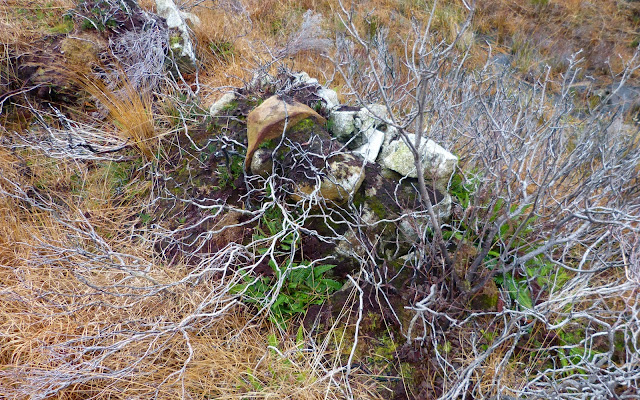 The old wall was easily found. 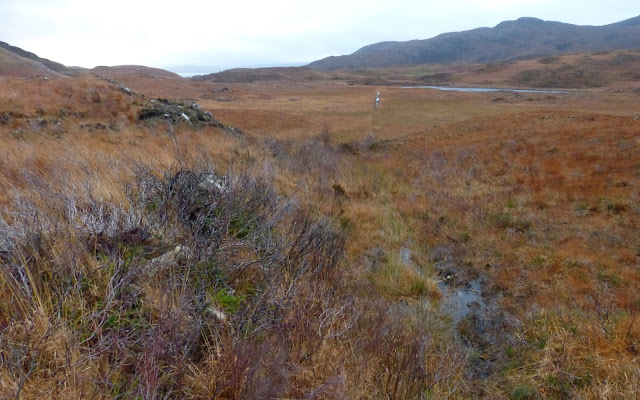 Looking south along the line of the wall it can be seen that, where it reaches the low, marshy land around Lochan nan Ealachan, visible to upper right, it becomes a ditch.

Crossing the wall and moving south between it and the existing Sanna road, we found an area of bracken.... 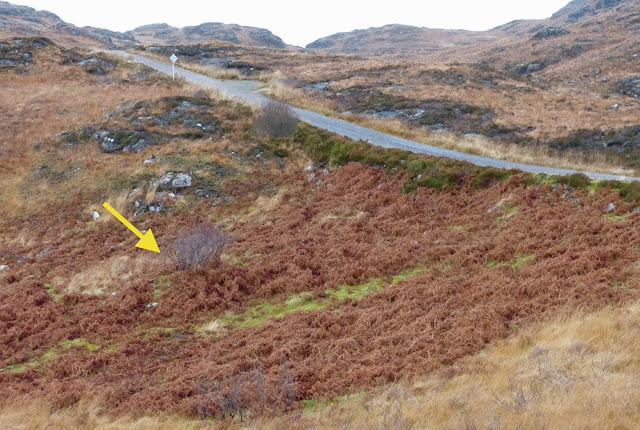 ....in the middle of which there is a mound formed of loose rocks, a cairn in a hollow.
Posted by Jon at 06:00