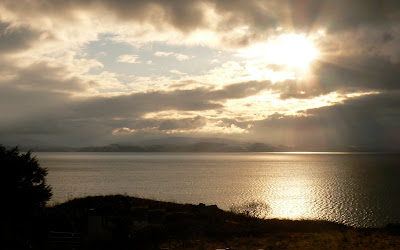 As dawn came the clouds were clearing after giving the mountains tops another white dusting, the snow coming down to the 100m contour. 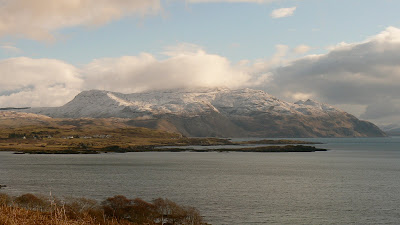 By ten the sun had melted most of what lay on the lower slopes, so we walked west from Ormsaigbeg, around the western flank of Druim na Gearr Leacainn and north towards Dubh Creag, the dark or black crag, with almost vertical views down to the indented coast below. 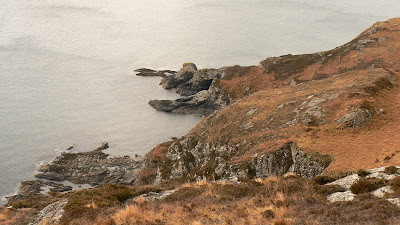 Our only companions were the Ormsaigbeg sheep scattered across miles of common grazing, all of whom ran away except one: and, when we approached, we realised it was a leary-eyed tup who had no intention of moving aside for us interlopers. We walked round him and he watched our every step. Later, as they say, we returned by a different route.
Far below us, out in the Sound, the Northern Lighthouse Board's Pole Star was stopped by the New Rocks, servicing the green buoy which marks those dangerous skerries. And, as we came closer to home, we looked across to the Community Centre, where the first of the two turbine masts had been assembled ready to be lifted.
Which leads to an error in yesterday's Diary entry, brought to my attention by a reader - for which I am very grateful. The power lines which bring in the village's electricity were completed in 1975, just under 35 years ago. Before that, a few of the village houses had a generator, but most operated without electricity. The power was turned on in the October, to great excitement.
Posted by Jon at 14:45