Ockle, population 1, is the jewel of Ardnamurchan's north coast. Set in a designated area of outstanding natural beauty, its name may be derived from the Pictish uchel, meaning 'high', or the Norse, ock, 'eight' and dalr, which may be either 'river' - reflecting the fact that eight streams come together here - or 'field'. 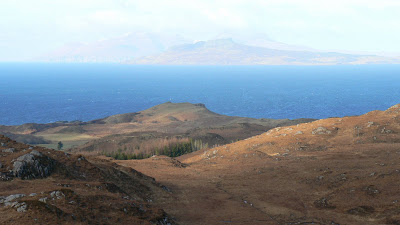 Last weekend we walked from the hamlet up the Ockle Burn into the wild hills from which it may take its name. The views, back down the valley and across to the Inner Hebrides, are spectacular. We saw no-one except Ockle's sole permanent inhabitant, Dougie Cameron, but put up a herd of red deer hinds which, as they ran from us, kept stopping and looking back, as if they could not believe that their peace had been disturbed. 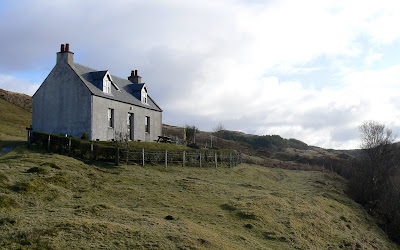 Dougie, his brother Dochie, and Dochie's wife Sue run Ockle Holidays, another of West Ardnamurchan's flourishing small businesses which offer visitors the opportunity to sample the solitude and grandeur of this peninsula. They have three letting houses at Ockle. Burnside, shown above, and Sruthan Ruadh below, had been derelict for years, but were refurbished and opened in 1997, while a third cottage, Tigh Dochie, was added later. 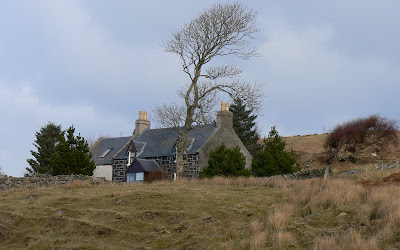 From Ockle, a track leads eastwards, past MacIain's Cave, to the famous Singing Sands and Kentra Bay, a walk of some 12km. Had we chosen to continue our walk south, we would have crossed the spine of the peninsula, reaching Loch Sunart at the Visitor's Centre at Glenmore, without seeing sign of human habitation.
This is wilderness, British wilderness, at its most beautiful.
Posted by Jon at 10:27