Ben Hiant, 528m, dominates the village of Kilchoan. Its Gaelic name, Bheinn Shianta, means charmed or blessed mountain. Beinn na h-Urchrach, the hill of the cast or throw, seen in this picture above the row of white houses in Pier Road, interrupts the slopes of Ben Hiant's northern flank, a long, rocky ridge which ends in a cliff which falls steeply into the waters of the Sound of Mull. It is formed of a hard igneous intrusive rock, a quartz dolerite, which cooled at much the same time as Ardnamurchan's volcano was active.

The views westwards from Beinn na h-Urchrach, back towards the village, are spectacular, showing how Kilchoan Bay is hemmed in on the west side by the heights around Beinn na Seilg (the hill of hunts), seen here with its summit in cloud. Enlarge the photo by clicking on it, and you will find the ancient MacIain stronghold, Mingary Castle, at bottom left, with the Calmac ferry pier beyond it. 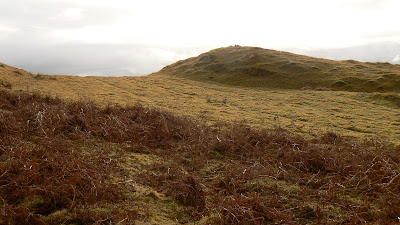 The lower slopes of Beinn na h-Urchrach were once inhabited. In the photo above there is clear evidence of strips, the so-called lazy beds used to grow crops, and, amongst the broken stone walls, the remains of what were once small houses. 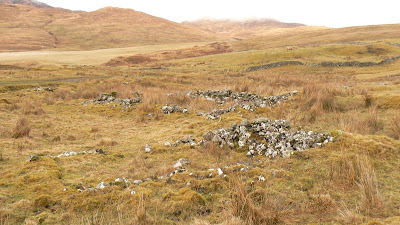 The hill is named after an axe which was thrown so accurately and hard it killed the Norwegian chief Muchdragan, some time around 1270. It was thrown by one of his vassals, Evun Cleireach, who suspected that Muchdragan's visit was a threat to Evun's beautiful wife. The tale is wonderfully told in Angus Henderson's informative little booklet, "Ardnamurchan Place Names", available at Kilchoan Community Centre.
The land is now part of Ardnamurchan Estate. It's good to see it actively used, with sheep, cattle and some fine stags grazing on the slopes.
Posted by Jon at 16:50