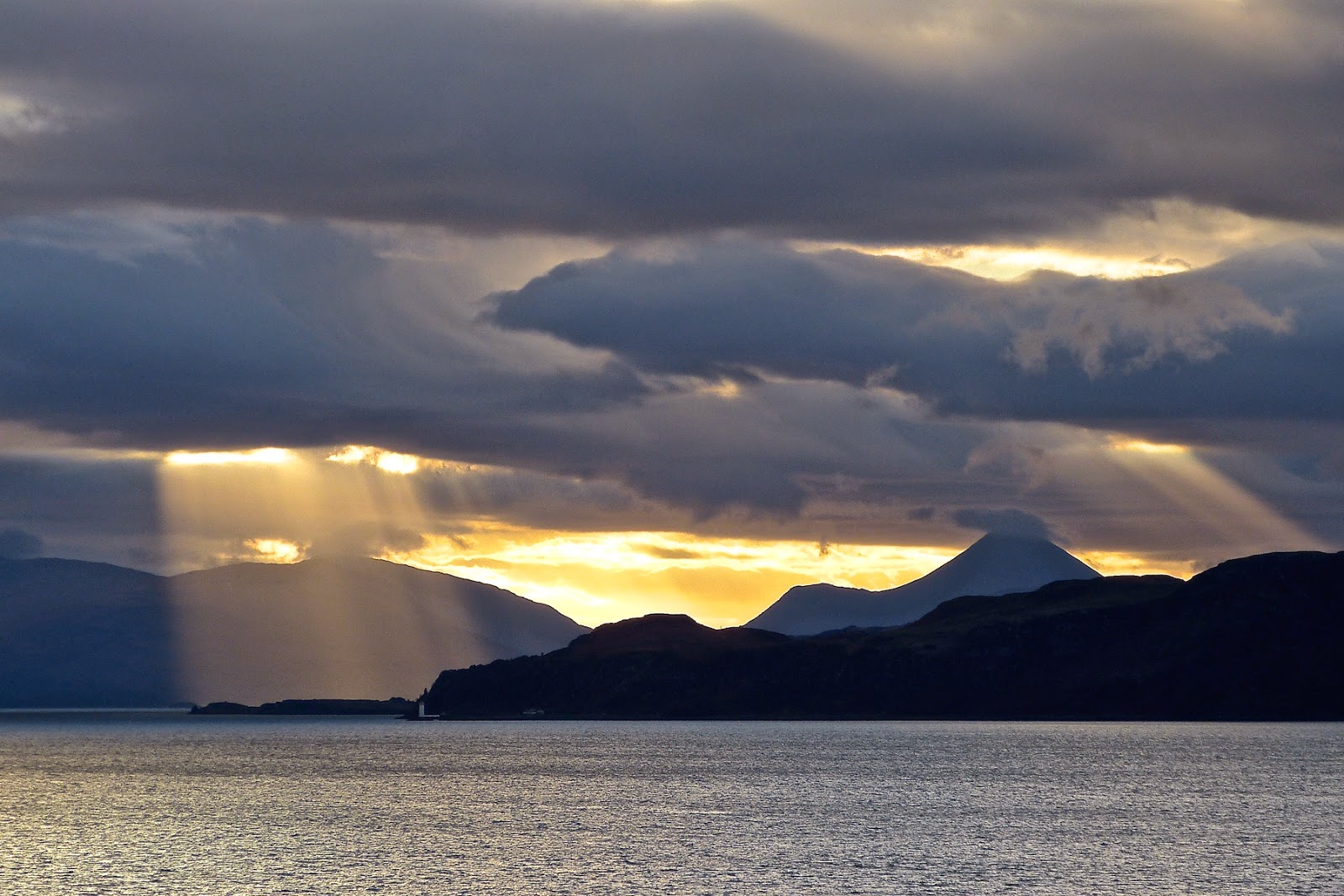 The forecast today was for wall-to-wall sunshine, a nice change after yesterday morning when we were whipped by another near gale from the southeast.  But this was the rather cloudy view across the Sound of Mull at 10.30 this morning as members of Ardnamurchan Community Archaeology set off for.... 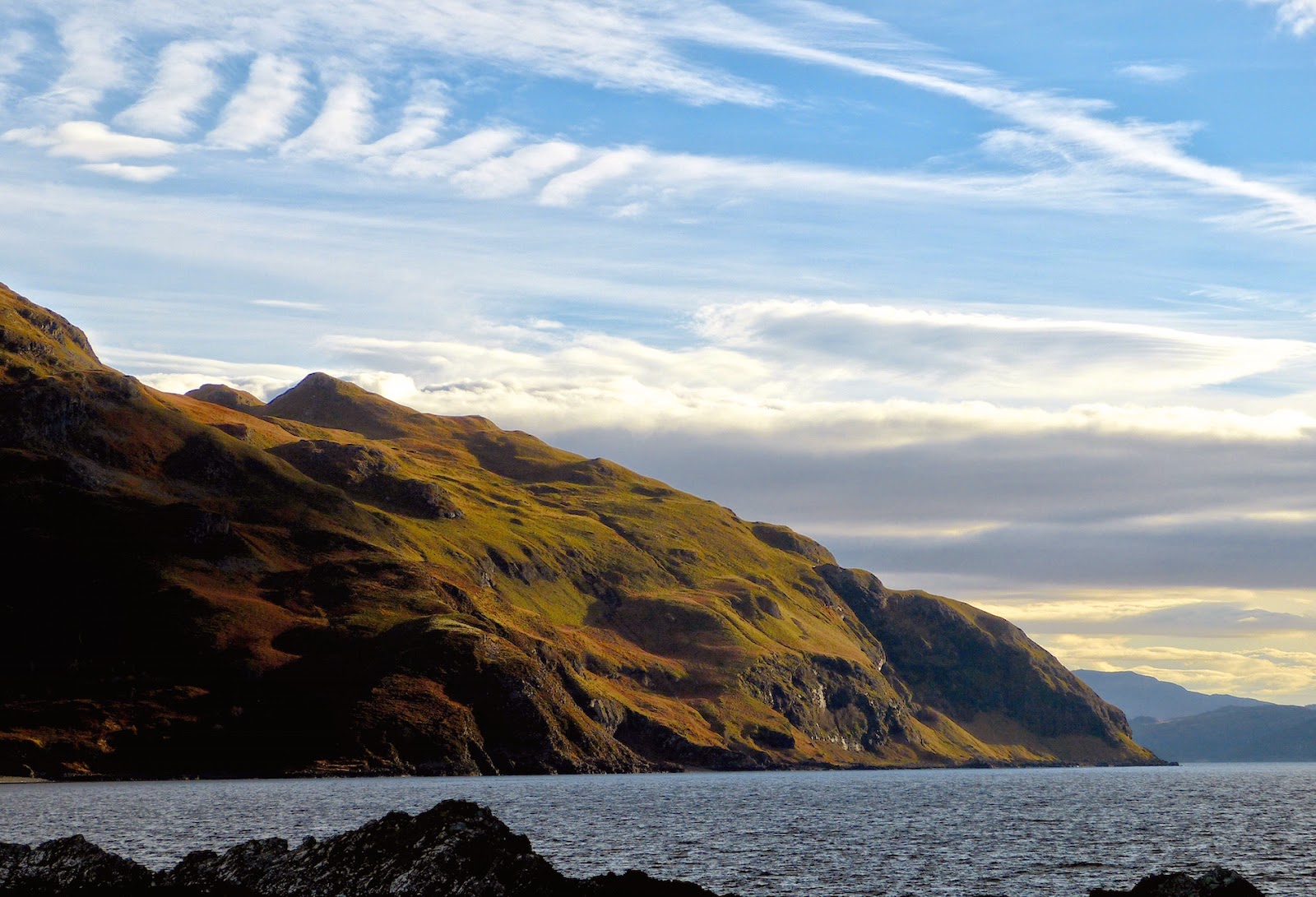 ....the coast to the east of Mingary Castle where Ricky Clark, an active member of ACA and the finder of Ricky's Cairn, one of the bronze age sites at Swordle that was excavated by the Ardnamurchan Transitions Group, had reported finding a new site.  Picture shows the point called Maclean's Nose and the conical peak of Sron Mhor. 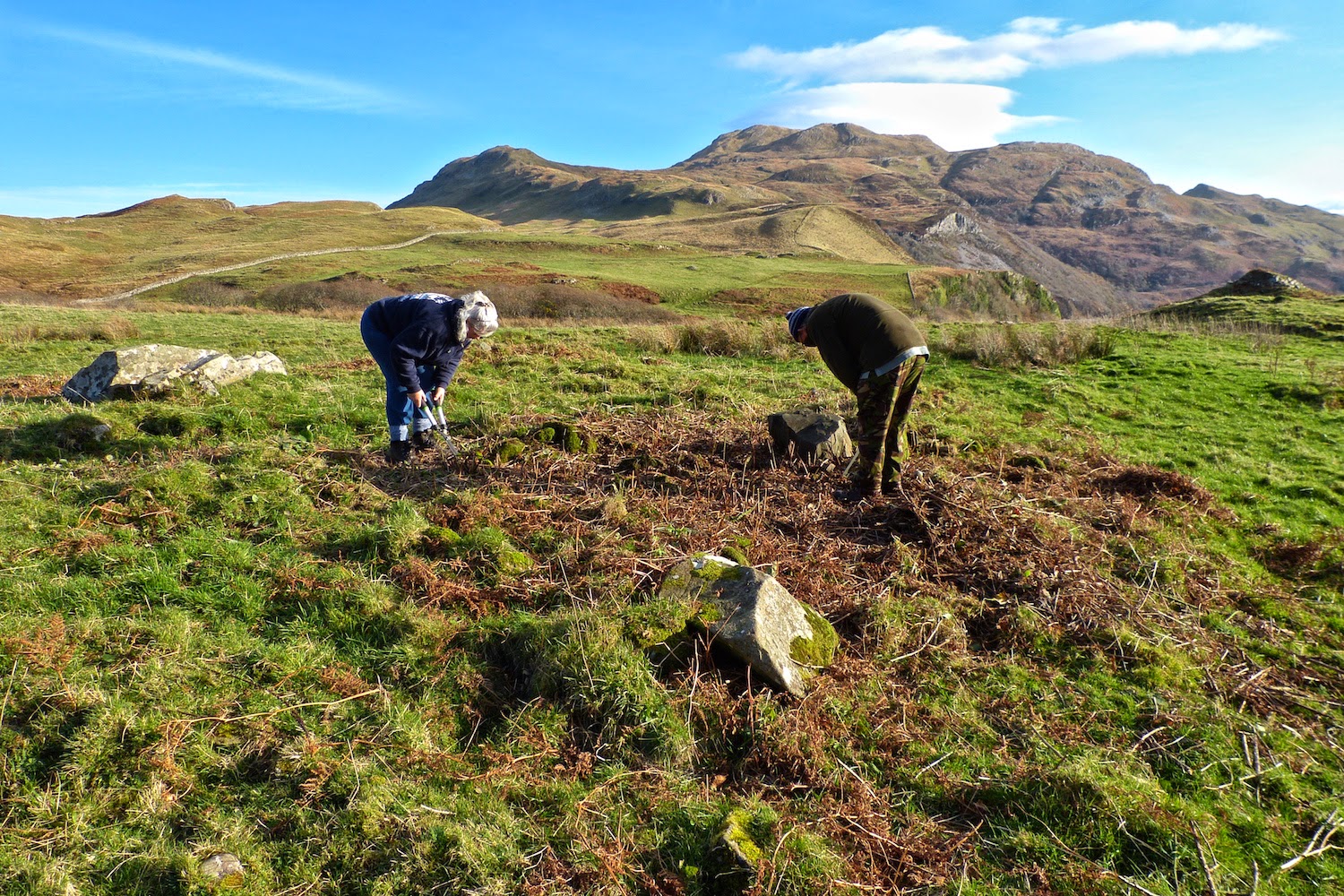 When we reached it, we could see immediately that the site was everything Ricky had promised and more - Ricky does seem to stumble across the sort of finds that the rest of us only enjoy in our dreams.

We set about clearing the site of its tangles of bracken and brambles, then stood back to look at what we'd uncovered. 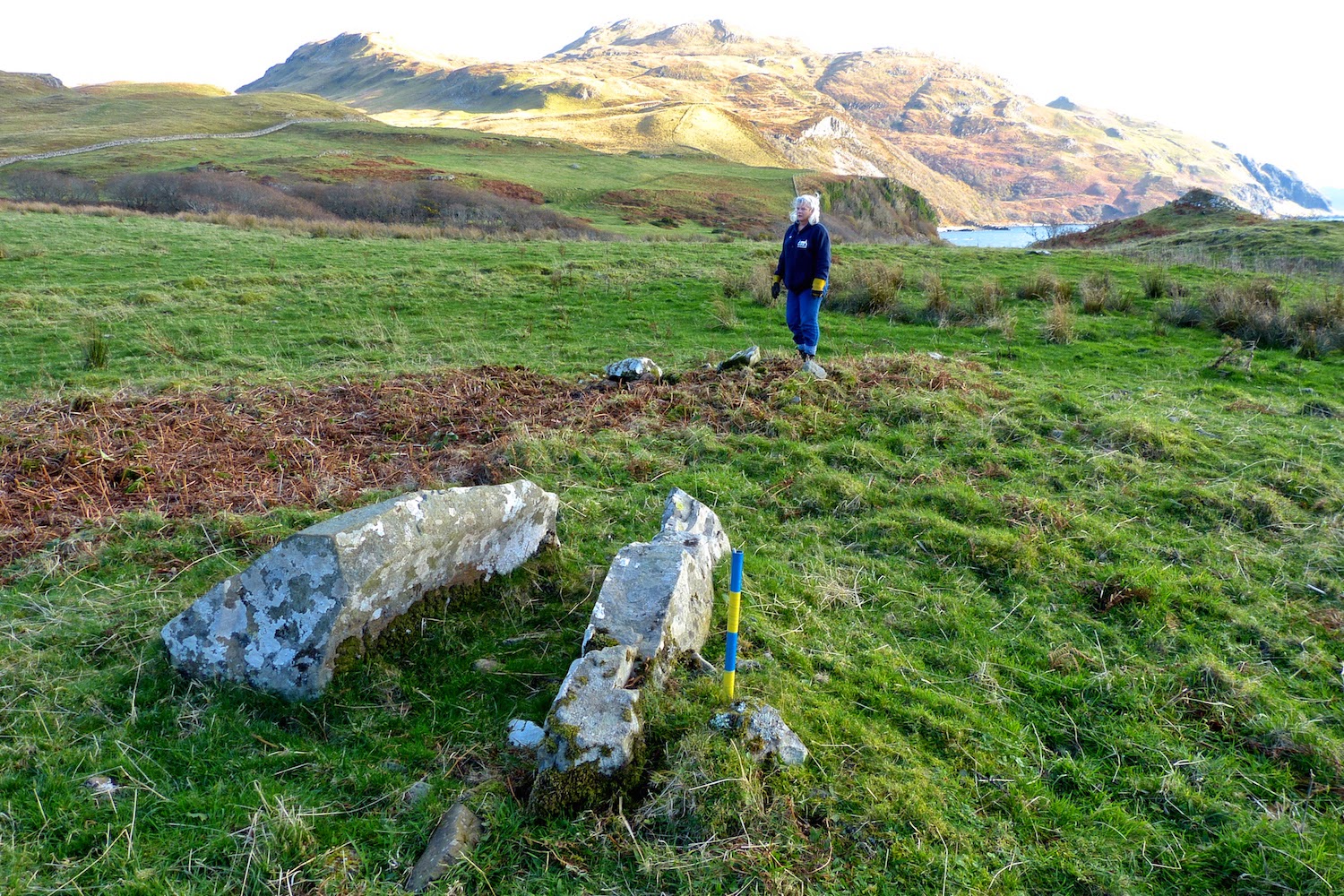 The site is almost certainly a neolithic kerb cairn.  It consists of a burial cist at its centre - these are two of the stones which would have formed part of the cist 'box' in which human remains were interred - with a circle of large stones of about 5m radius around it, the 'kerb', inside which the cist would have been covered by a mound of stones.  Most of the stones of the mound have been robbed, and the cist burial has suffered the same fate, so little remains except the two cist stones, three of the outer kerb stones, and.... 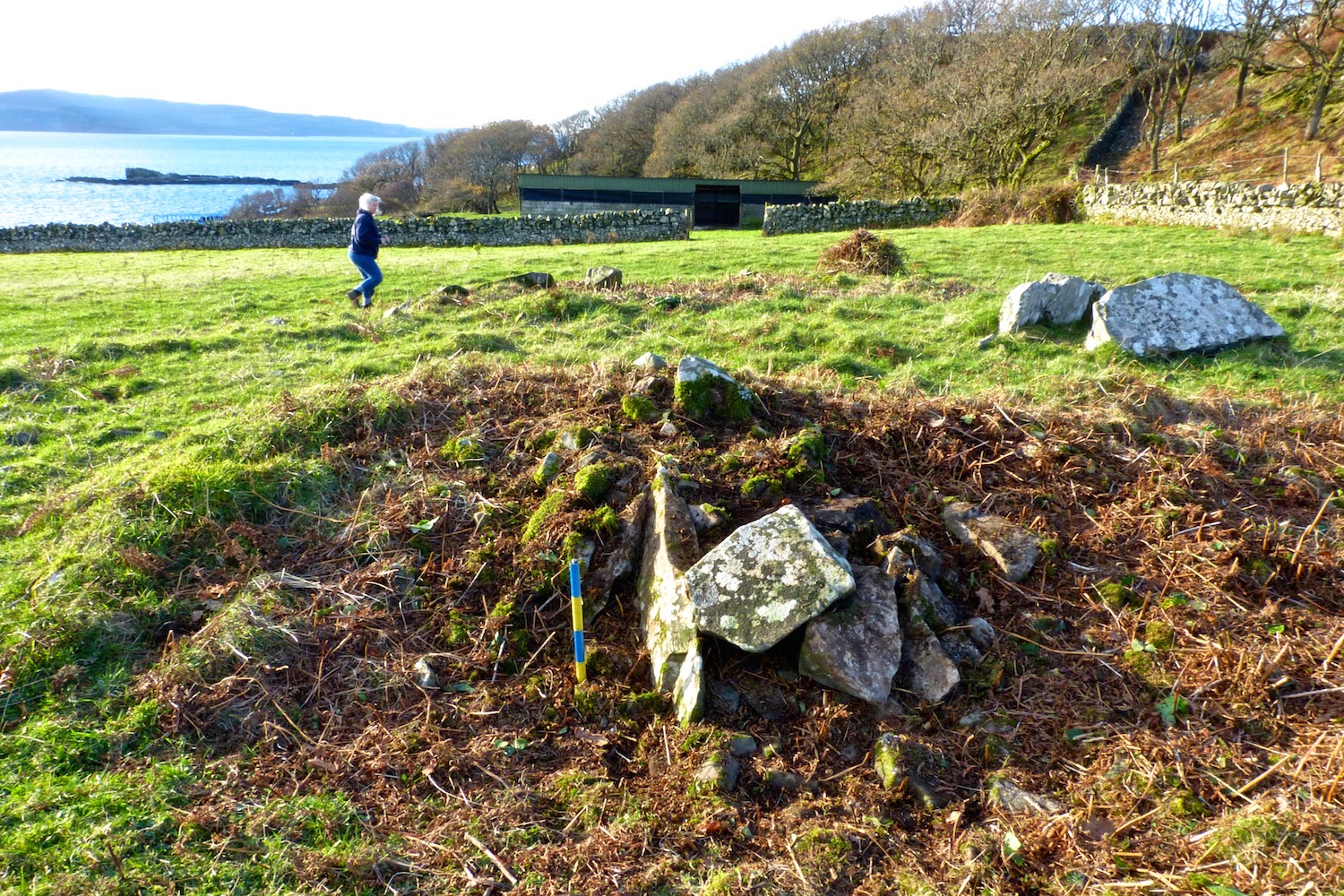 ....this further, and smaller cist, possibly a later addition during the bronze age when, as at Swordle, older cairns were re-used.

There is no sign of this structure on any of the archaeological record sites such as Canmore, so it looks as if the cairn, which Ricky has called Erickson's Cairn, is a new discovery, a very exciting one which we're looking forward to showing to the officers from Archaeology Scotland when they come here in a few weeks' time. 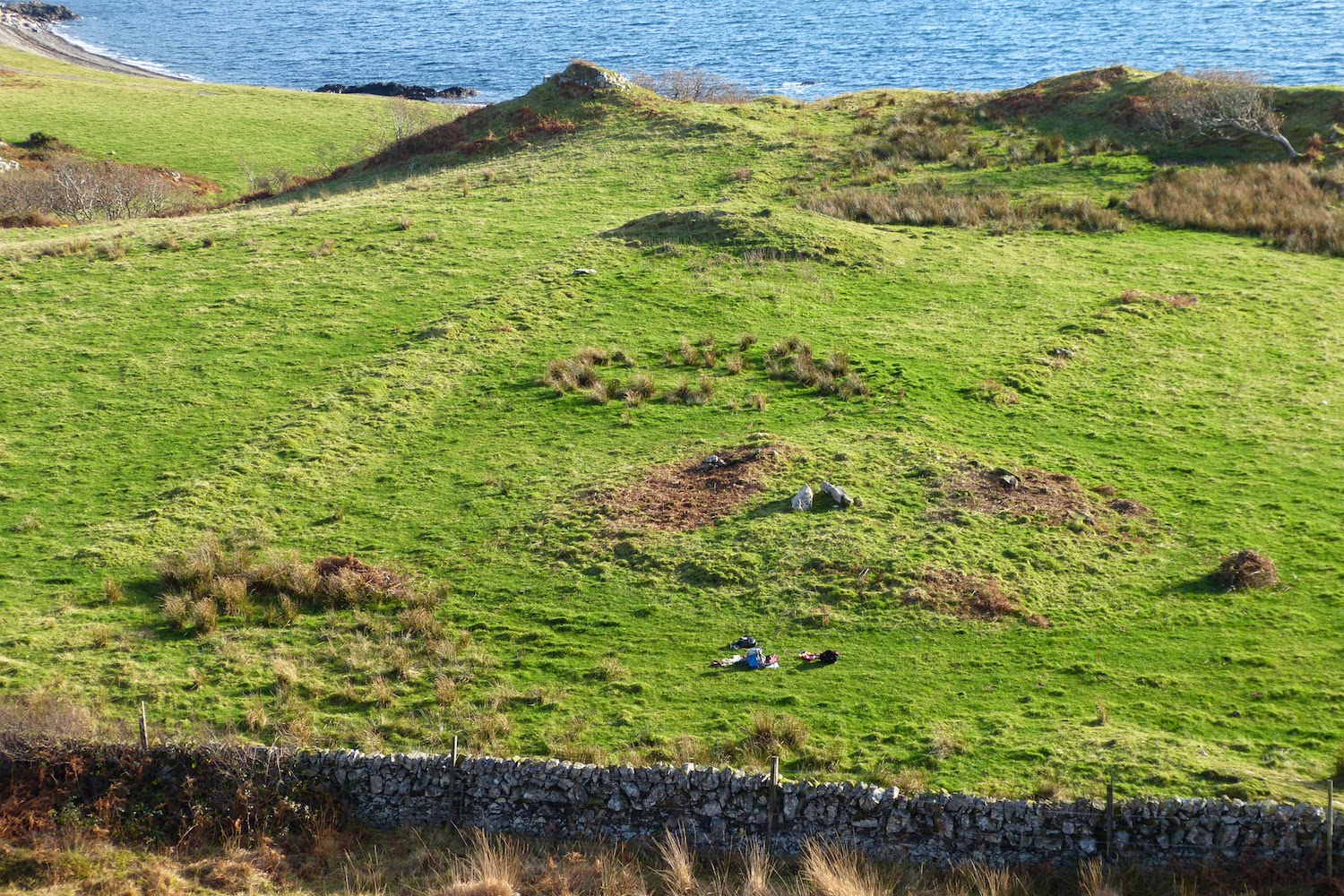 As of there wasn't excitement enough for one day, a view from a nearby hill shows two straight structures, possibly short sections of stone wall, and evidence from a circle of marsh grass of another circular structure.  Erickson's Cairn is at right centre, with the stones of the cist visible at its centre.


Many thanks to Ardnamurchan Estate for permission to work on the site.
Posted by Jon at 15:18