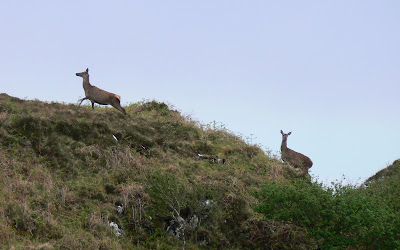 Lochan Caorach - caorach is Gaelic for sheep - lies a couple of kilometres due south of Grigadale farmhouse, in some wonderfully wild countryside. Sadly, when we set out yesterday morning to find the lochan, the weather was grey with a gusting southeasterly wind.
After leaving the car on the lighthouse road just to the south of the slopes of Beinn Bhuidhe, we crossed the fence and struck out to the southwest, negotiated a ford of Allt Grigadale, the stream which runs into Loch Grigadale, and had began to climb a slope, following a broken drystone wall, when we disturbed four red deer hinds, which took off over the hill. 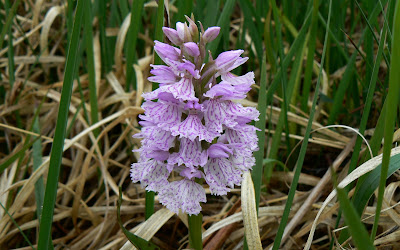 The first orchids were in flower amongst the long grass and heather on the drier slopes, with the usual variety in colour, from these lilac, spotted ones through to pristine white. These are the first orchids we've seen this year: why they should be early on these slopes is a mystery. 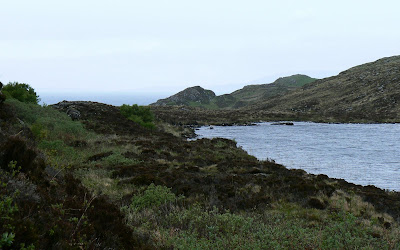 Lochan Caorach is little smaller than Loch Grigadale. A stinging shower, driven by the wind, caught us as we approached the lochan, so what could have been a very pretty scene reflected the grey of the weather. 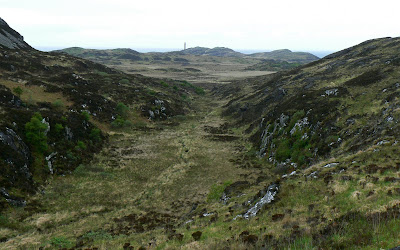 Running parallel to the lochan, and just over a low ridge, is the narrow glen which contains the stream Allt a Bhriaghlann, the stream of the fine enclosure. We sat in the shelter of a rock and, with a view down the valley to Ardnamurchan Point Lighthouse, ate a damp lunch and enjoyed the loneliness of the place. 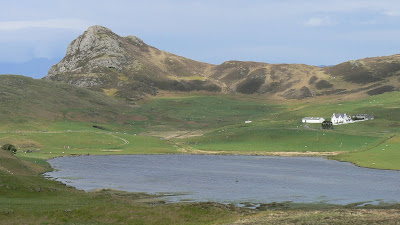 By the time we were walking back to the car the clouds had begun to break, and patches of sunshine were running across the hills. This picture shows what must be one of the most beautiful settings for a house on this outstandingly beautiful peninsula. Grigadale is a working farm, though the house is available for holiday rental through Steading Holidays, here. It lies in a bowl of land, with Loch Grigadale in front and the forbidding bulk of Sgurr nam Meann standing behind it.
Once again, we walked for several hours amid majestic scenery, and saw no-one. Even had there been fifty people wandering around to the south of the lighthouse road, they would have been lost in the immensity of the place.
A map of the walk is here.
Posted by Jon at 08:50