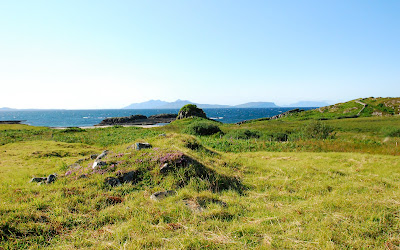 The Ardnamurchan Transitions team, who are back at Swordle for another season's archaeological digging, gave an excellent  talk to over eighty visitors and locals in the Kilchoan Community Centre on Thursday evening.  In it, Ollie Harris described what the team has found over the last six years of excavations, and went on to explain the main aims of this year's work.

One site which they have worked on every year is the cairn of Cladh Aindreis, a site which was in use over a period of a thousand years.  The finds there have been historic, as they include six thousand year old bones, the oldest ever found in the UK and possibly even western Europe - bear in mind that the pyramids are a mere 4,000 years old. 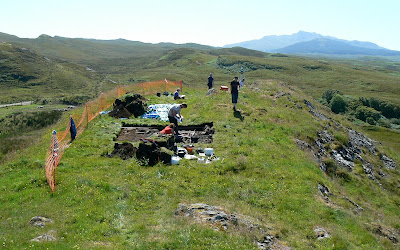 One of the main sites for this year is Dun Murchain, a ridge which runs from the Ockle road towards the sea about a kilometre west of Swordle Bay.  Last year they found Iron Age remains including evidence of burning, possibly indicating that metal was worked on the site. 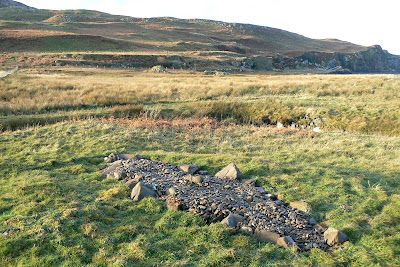 Dr Harris kept the highlight of his talk to last - the wonderful Viking boat burial finds from last year.  The list of items taken away to be conserved seems to become longer each time they are described, but they include a spear, sword, axe, shield boss, drinking horn, bronze ring pin from Scandinavia, hammer, tongs, sickle, ladle, flints for fire-making, whetstone from Norway, and wood and rivets from the boat's hull.  And we saw the first pictures of the sword after conservation work had begun to reveal its beauties, including an intricately decorated pommel.

But so many questions remain unanswered.  For example, was there a Viking settlement at Swordle?  Why was the boat burial so close to the much more ancient tomb of Cladh Andreis, and was this pillaged by the Vikings?  And who was the man buried in this boat, the first such burial found on the mainland of Britain?  These are all questions upon which this year's work may throw further light.

Many thanks to Dr Harris and the team for the talk, much enjoyed by all - and a reminder that the Open Days at Swordle are Sundays the 12th and 19th, 10.30am to 3.30pm, and that there are special activities for families going on every day next week, details here.


The Ardnamurchan Transitions website is here.
Posted by Jon at 15:25