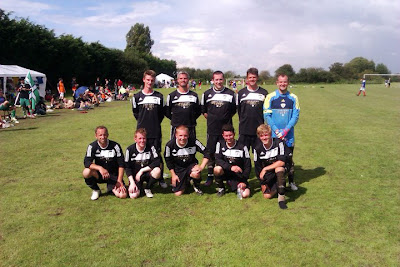 After holding our first tournament in Kilchoan last summer, Kilchoan FC were kindly invited to take part in a more established tournament this year by The Easton Cowboys who are based in Bristol.  The Cowboys, along with their female counterparts The Easton Cowgirls, travelled up to Ardnamurchan for our own tournament last year so we were more than happy to return the huge favour ourselves.

The Cowboys and Cowgirls don't just compete at football, they are also involved in basketball, netball and cricket and they all have a strong ethos of equality whatever the person's age, gender, race, religion or sexuality.  So with the opportunity of being able to compete in a 20-team tournament, Kilchoan FC happily took to car, bus and airplane to represent Kilchoan, Ardnamurchan and Scotland at the weekend-long event being held in Berrow in Somerset.  Most of the teams competing were from England but some were from as far away as Germany, Lithuania and even BRAZIL!

We arrived on Thursday afternoon and made our way to the venue in time for the draw being made.  There were 4 groups with 5 teams in each and as usual for Scotland, we were drawn in the "Group of Death" against the hosts The Easton Cowboys, The Yard United FC from Devon, 1in12 FC from Bradford and finally The Bristol Refugee Select FC.  Being such a newly formed team with a lot less experience than the other teams, I won't lie and say we had huge expectations of progressing from a group which contained two of the favourites for the competition, so off we went to beds to prepare for the first game on Friday…….after a few pints of course (we had to acclimatise to our surroundings after all).

We had travelled down with 10 players in total but luckily for us our captain Richard Van de Peer had some connections and was able to enlist two extra bodies, giving us the a squad of 12 players.  The squad included:  Justin Cameron, Richard, Reuben and Oscar Van de Peer, Danny Anderson, Jamie Santus, Will Sanzo, Calum MacPhail, Mark Dornan, Simon Glasser, Craig Lindsay and Iain Macdonald.

First up was The Bristol Refugee Select, the only team we really thought that we could have a chance of beating.  This turned out to be the case despite Kilchoan going behind after some sloppy defending - a flaw which surprisingly never effected us again the whole weekend!  Final score: 6-2 (Goals:  Rueben and Oscar Van de Peer, Iain Macdonald, Mark Dornan, Craig Lindsay and Will Sanzo).

So having reached our tournament target of winning one game, the team started to relax and enjoy the occasion.  This seemed to follow us onto the pitch as we then faced The Easton Cowboys for our second game.  This was a hard fought affair against the host team and surprisingly for us we beat one of the tournament favourites.  Final Score 1-0 (Goal: Craig Lindsay).

We were more than happy with our efforts on Friday so we thought that things could only go downhill from the high of winning two games.  How wrong we were!  Next up on Saturday was a team from Devon called The Yard who have a reputation (unfairly I might add) of staying sober and being in bed early for the games, so we thought we were in trouble.  Kilchoan could have gone ahead quite early were it not for Captain Van de Peer blasting a penalty kick wide - we thought we had missed our chance.  But soon after that Kilchoan were awarded free kick on the edge of the box.  Mark Dornan stepped up and curled it beautifully into the top corner: 1-0 to Kilchoan.  Mark's goal was fit to win any match but we weren't finished there.  Obviously buoyed by our surprise lead we started to play some really nice football which culminated in a goal which was later to be voted 'Goal of the Tournament'.  At a risk of sounding like I'm boasting I'll keep it simple and say that I beat two defenders on the bye-line and blasted it past the keeper: 2-0 Kilchoan.  After some wild celebrations the game finally resumed and low-and-behold, before the end Kilchoan made it 3-0 with Richard making amends for his penalty miss earlier by despatching from the spot just before the end.  Final Score 3-0 (Goals: Mark Dornan, Iain Macdonald and Richard Van de Peer).

With that victory we realised that we were guaranteed a place in the quarter-finals which was beyond our expectations before the tournament.  We actually qualified for Sunday's fixture with a game in hand which was against Yorkshire team 1in12 FC.  As all their opponents were still in contention to qualify we realised we had perform to the best of our abilities for fairness sakes.  We came out 1-0 winners against the Bradford-based team.  Final Score: 1-0 (Goal: Will Sanzo).

So, Sunday brought the quarter-final against FC Vova from Vilnus in Lithuania, a team which brought a huge support including their own scarves, songs and drums!  It was clear to see from kick-off that it would be a battle against them with Kilchoan looking very lethargic.  The game seemed to drag on with no clear-cut chances and it finished 0-0 meaning a shoot-off to decide who progressed.  This is slightly different from a shootout - 3 players from each team have 20 seconds to dribble to goal and beat the opposition goalkeeper.  Unfortunately it went to sudden-death with Kilchoan missing a kick.  We were eliminated. 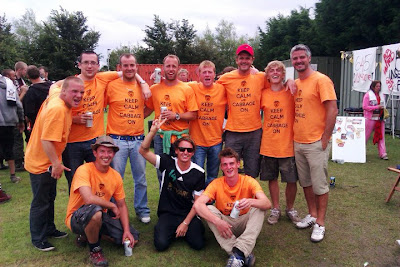 In fairness we did exceed our own expectations, losing only two goals in regulation time (both in the first game), kept four clean sheets in a row, played some beautiful football, scored the 'Goal of the Tournament' and to cap it all off the team we were awarded the 'Outstanding Contribution' Award at the Awards Ceremony for the spirit in which we contested the tournament and the effect we had.  We even had some celebrities want their pictures taken with the "Scottish Lads"; 'Chinese Alan' from Sitcom "Gavin and Stacey" and chart-sensation Ben Howard were among the admirers of our efforts over the weekend.  What started as a bit of an adventure turned into a hugely worthwhile experience for all of us in which we made some new friends who we hope to keep a connection with at next season's tournaments.   Dare I mention the invitations we had to Devon, Lithuania and ARGENTINA in 2013?

Finally, I'd just like to thank all the players who made the effort in going to Bristol and putting Kilchoan on the map.  You all did Kilchoan proud and I know we all thoroughly enjoyed every minute of it.  A special mention has to go to the lads who were drafted in, especially Oscar Van de Peer who was voted the Kilchoan FC player's player of the tournament.
Posted by Jon at 09:54

Email ThisBlogThis!Share to TwitterShare to FacebookShare to Pinterest
Labels: sports