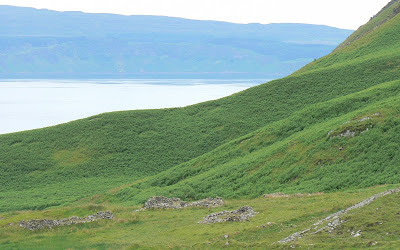 Tucked into a fold in the eastern slopes of Ben Hiant, the Blessed Mountain, lies the small village of Bourblaige. With views south across the Sound of Mull to Tobermory, and southeastwards up Loch Sunart, surrounded by a patchwork of small fields separated by drystone walls, its houses have the idyllic setting that many dream of enjoying. But this place is deserted, its roofs burnt down, its walls crumbling, its fields overgrown, for Bourblaige is a monument to greed and the cruelty of man upon man. 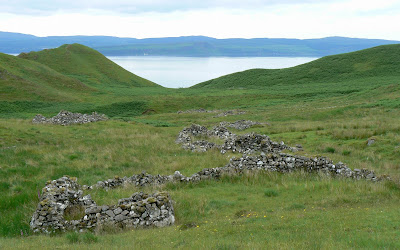 Bourblaige is a clearance village. In 1828 Sir James Riddell, who owned Ardnamurchan Estate, evicted the villagers and let all its land, combined with land from the neighbouring cleared village of Tornamona, to a single, tenant farmer who would introduce the latest economic 'miracle' - sheep.
Some of those evicted moved to, and settled on much poorer land at Plocaig near Sanna, or in Ormsaigbeg, which was organised into the new system of crofts; but many left for the industrial cities of southern Scotland or in search of opportunity - and freedom from tyrannical landlords - in lands overseas. 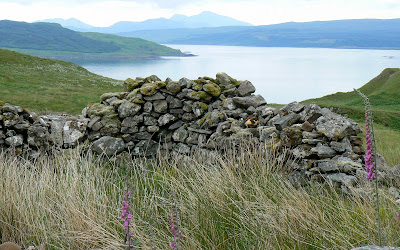 The evictions were carried out with considerable cruelty. There is a story that one crippled old woman who barricaded herself into her cottage had her front door walled up by a stonemason, imprisoning her until she agreed to leave. Looking at the buildings, few of their drystone walls stand above a metre high, suggesting that those who carried out the evictions went to some lengths to knock them down.
On the ground today, about fifteen of the ruins may be identified as dwelling houses, although there are many more buildings - twenty-eight according to the Royal Commission on the Ancient and Historical Buildings of Scotland - probably mostly byres. Most of the dwelling houses are tiny, no larger than a modern house's living room. Sheep graze on the better land around the village, but the lazy beds, where crops such as potatoes were grown, are still clearly visible on the slopes around the village.
Posted by Jon at 16:38