The Caves of Sgurr nam Meann 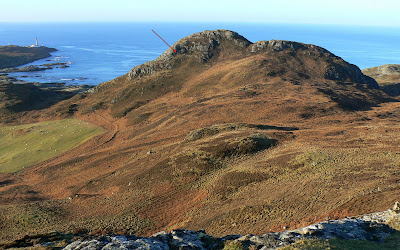 High on the slopes of Sgurr nam Meann, a mountain overlooking the bay just to the northeast of Ardnamurchan Point Lighthouse - seen here from the top of Beinn Buidhe - a weakness in the the hard igneous rock of this fortress-like mound has allowed the formation of two caves. One is arrowed in the picture, the other is a few metres to its left. 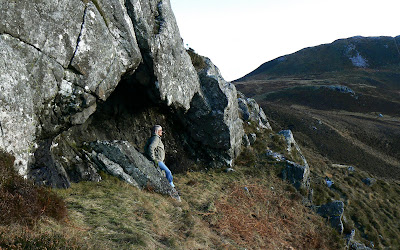 Neither is of any great depth, little more than an overhang, but both are very likely to have been homes to our Neolithic ancestors some 6,000 years ago. They were probably temporary shelters, improved by laying branches against the opening and carpeting them with heather. Used for a period each year while their nomadic inhabitants exploited the food available in the surrounding coast and land, their commanding position and the steep slope below them would have made them safe against attack. The one above is the southern cave, overlooking the present Grigadale farmland. 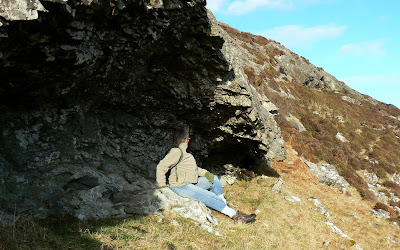 This one faces almost east, towards Beinn Buidhe. Near it is an area of flat land which would have made a fine place for the caves' inhabitants to meet, to cook, and to look out across the view. 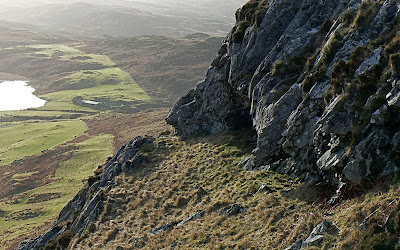 This picture is of the same cave but from the other side, looking roughly south. Far below are the fields of Grigadale and the waters of Loch Grigadale - a small fraction of the wonderful view from the caves. 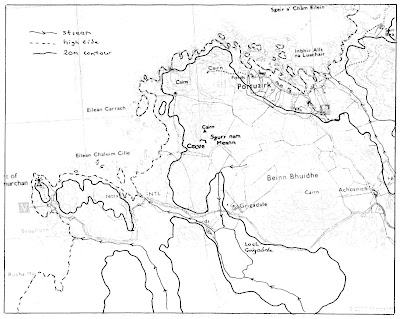 This map suggests the geography of the time. The dashed line is the present high-tide mark, the full line the 20m contour. With sea level perhaps 20m higher, the whole of Grigadale would have been a protected, inland lagoon rich in fish, shellfish and water birds - rather like Loch Teacuis today. To the west, the site of the present lighthouse would have been one of two small offshore island while, to the north, most of Portuairk, the village at the centre of the known universe, would have been drowned.
Posted by Jon at 11:06