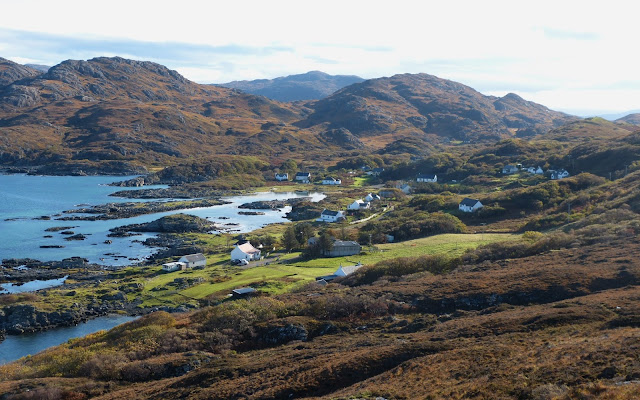 Portuairk is the most westerly of the Ardnamurchan crofting townships, and was the last to be settled, in 1843.  The people who came there had been moved on from clachans which had been cleared from the 1820s onwards.  So, for example, some came from Swordle Corrach, some of whose inhabitants had previously been evicted from Bourblaige and Tornamona in 1828.  [1] 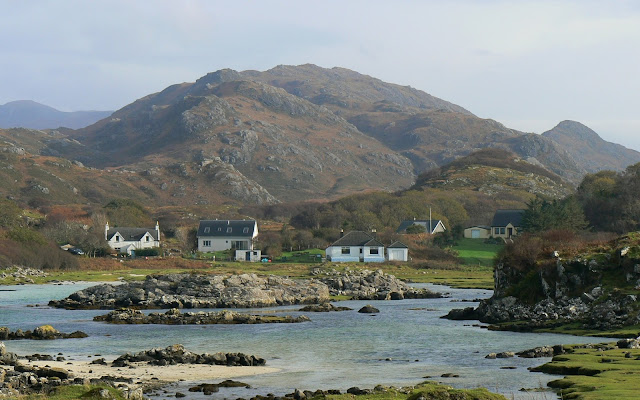 The derivation of the name 'Portuairk' is controversial. Donald MacDiarmid, in his 'Ardnamurchan Place Names', says that the name may be from the Norse saur (mud) and vik (bay), but prefers the Gaelic port shobhrag, the bay of little primroses, on the grounds that "(a) the bay is not muddy, and (b) the surrounding fields and meadows, especially those lying to the east, abound in primroses and a great variety of beautiful flowers, all in their proper season." [2] The 'Annals of the Parish' states that it may be Gaelic. "Some people pronounce this township Port Uairce as did the population census of 1891. This would come from the aspirated form of suairce meaning pleasant, an unlikely meaning in an area where there are numerous 'pleasant ports' and the Gaels were not prone to using romantic names to describe places. The second pronounciation is Port Uaraig or Port Uaric, which appears in some of the Session Books. This would come from the personal name Ulrig, a Norse warrior who made his way down the western sea­board." [3] 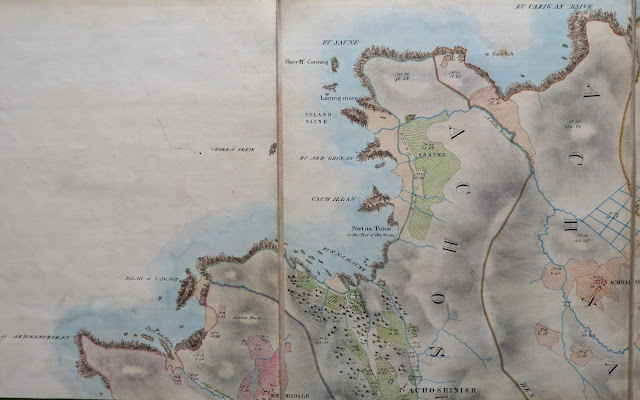 The earliest map showing the Portuairk area clearly is William Bald's map of 1806, [4], though Bald does not label the place 'Portuairk'.  The site now occupied by the village was part of the Achosnich clachan, as was Sanna.  The fields of Portuairk are shown as being worked, but there are no houses marked, so presumably the people who had those fields lived in Achosnich. 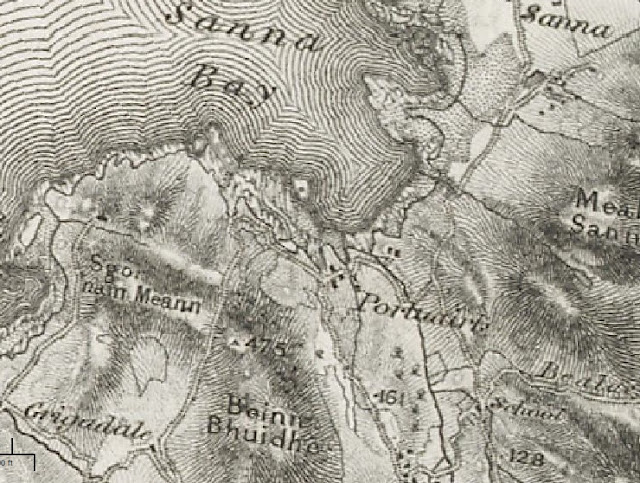 By 1856, when the Ordnance Survey's First Series map of Coll was surveyed, the settlement was well established, with six houses marked, four at the eastern end of what is now Portuairk, and two shown on the Sanna side of Sruthan Bhraigh nan Allt - see Diary post about these buildings here.  Among those who had settled in the township were the MacColls. [1] 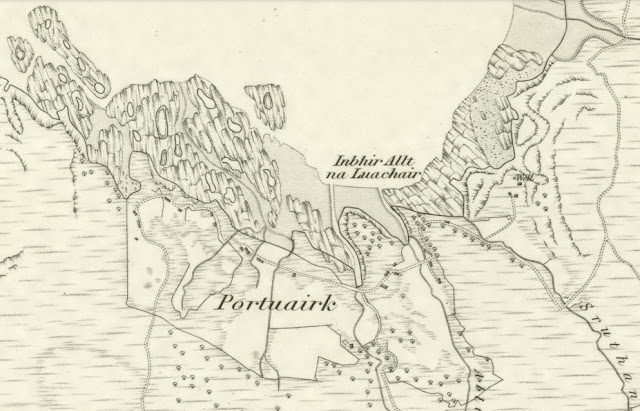 By 1872, when the first 6" map was surveyed by the Ordnance Survey, some twenty-one buildings existed in Portuairk, and the township was taking on its present-day arrangement, with houses scattered along the waterfront.  The head dyke, the stone wall that separates croft land from the common grazings, had been built, but the area bounded by it contained few walls, which is puzzling as the individual crofts were probably, by that time, well established. 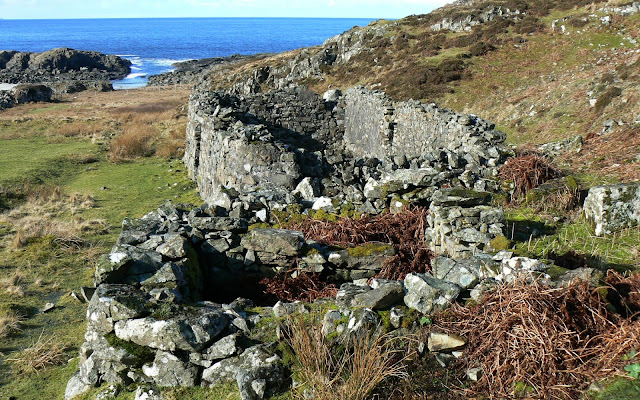 Portuairk was connected to neighbouring townships by three tracks.  The southern followed the line of the present road, and ran to Achosnich, an eastern branch led to Sanna, with a short spur which connected to the small settlement on the other side of Sruthan Bhraigh nan Allt, while the western turned to run south to Grigadale.  Although the house at Bay MacNeil, above, had by this time been built, it was connected not to Portuairk but south to a place called the Store House on the present Achosnich-Lighthouse road near Carraig.  A link to the 1872 map is here. 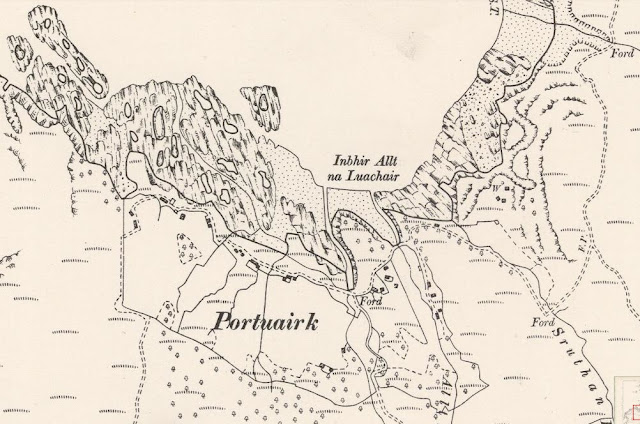 The following 6" map, surveyed in 1897, shows little major change except that there are more buildings.  The path  to the satellite settlement to the east has fallen out of use, and the buildings are marked as roofless, so were no longer occupied. 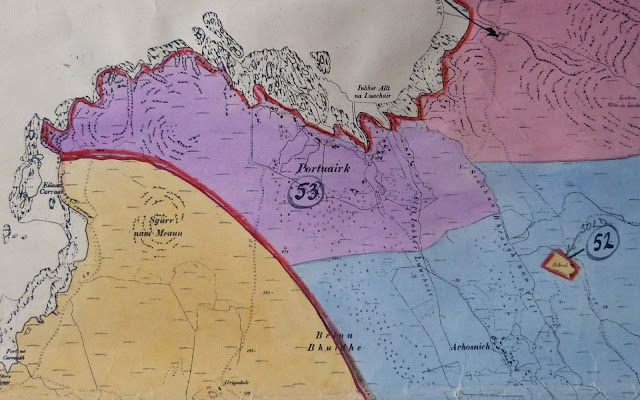 When Ardnamurchan Estate was broken up in 1948 and various lots sold to private buyers, the Achosnich lands were broken up, with both Portuairk and Sanna sold separately, Portuairk as Lot 53. [4]


An interactive map of the Portuairk area is here.