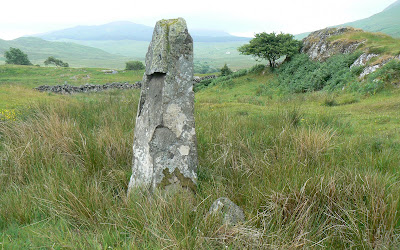 In the tiny crofting hamlet of Branault, on the road to Ockle, there is a standing stone, or megalith, which may date back some 4,000 years or more. Beside it, lost in the marsh grass, is another stone, half-buried, which may be the stump of a second megalith, broken off and removed from the site. 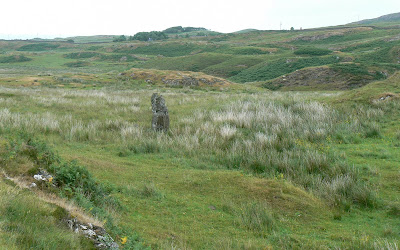 Many similar standing stones, or megaliths, are associated with the Bronze Age people who inhabited these remote areas of Scotland around 2,000BC, but others may be older, dating to the Neolithic. There are hundreds of Scottish megaliths, many in the Tobermory area just across the Sound of Mull but, as far as the Diary knows, there are relatively few on West Ardnamurchan. The only similar one is that at Camas nan Geall, which was later carved with Christian symbols, while Branault's is plain, cut out of the local rock and stood on its end.
The purpose of such stones is unclear. They may have been way markers, memorials to battles or other events, or - as in the case here, where there were two - they may have astronomical significance. One reference suggests the Branault stones have an alignment, with Ben Hiant to the south and the Cuillin Hills to the north - but the photo at the top, with Ben Hiant in the distance, refutes this, the stones being aligned roughly 30 degrees to the west of north. 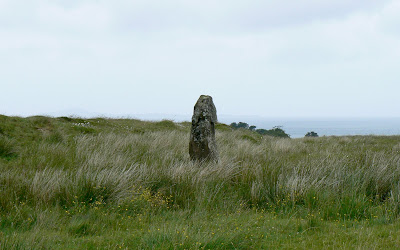 Another possibility is that this is a religious site. The stones stand in a dip at the summit of a small, rocky hill, and are surrounded, except on the north, by marshland: it might have been that they stood in the centre of a small pond. The land around the hill is strangely broken, and quite unlike anywhere else on Ardnamurchan. And near them stood a church, Cladh Chatain (the churchyard of St Catan, who died in 710AD). The church, and its associated well, is lost, but it wasn't uncommon for the early Christians to site their places of worship on more ancient ones - as they did at Camas nan Geall.
The stone is on Ardnamurchan Estate land but the best way to reach it is through the Branault Croft farmyard. Please phone the Camerons on 01972 510284 to ask permission before proceeding.
A map is here.
Posted by Jon at 13:47