Adelphi Distillery Ltd has recently submitted detailed plans to Highland Council for the construction of a small, compact whisky distillery here on West Ardnamurchan, a prospect which fills The Diary with joy. For a start, it's a wonderful place to distill whisky surrounded, as it is, with several other fine distilleries, and then there's the prospect of employment in an area which badly needs these sorts of opportunities.
However, as with all major developments in such outstanding scenery, there are worries which have to be allayed. These were dealt with at a recent Community Council meeting (link here) by Donald Houston of Ardnamurchan Estate, who is a Director of Adelphi Distillery. Adelphi, established in 1826, is pumping several millions of pounds into the scheme, which is being developed at Glen More.
The above picture shows that the completed buildings will have a low visual impact. Assurances were also given that the proposed year-round Visitor Centre at the distillery would not take business away from the nearby Nadurra Visitor Centre (seen at left, website here), that, with two places to visit, visitor numbers could increase. 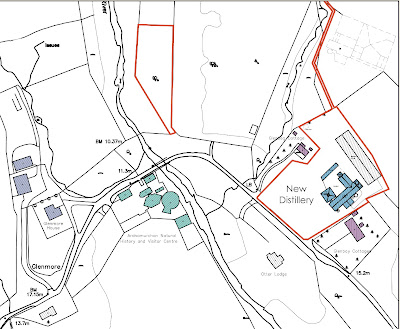 A planning application was submitted to Highland Council early in January, but the Community Council, which is normally consulted on all applications, felt enthusiastic about the project, not least because it will create at least three jobs initially, a number which could rise to nine. An early decision by Highland Council is essential if the scheme is to ahead.

A feature of the distillery is that it will be largely powered by local wood. A chipping facility has already been built on the Estate, and this will provide the heat for the distilling. While there will be some increase in traffic down the B8007, for example to bring in casks and malting barley, everything is being done to keep this to a minimum. The 'draff', the solid residue left after fermentation, will be fed to Estate cattle. 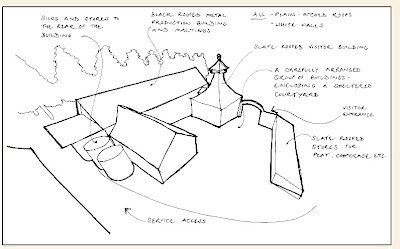 Adelphi, which currently selects fine casks from other distilleries for bottling, currently sells most of its produce abroad, but we are fortunate that, by special arrangement, a selection of its whiskies is available here in West Ardnamurchan, at The Ferry Stores.
An information sheet with more details can be downloaded here.
Adelphi's website is here, and Ardnamurchan Estate's here.
Posted by Jon at 10:16