Kilmory is a small crofting township on the north coast of West Ardnamurchan.  Its resident population at the time of writing is eight, and much of its croft land is underused, but it once had a much larger population, and is probably very old. 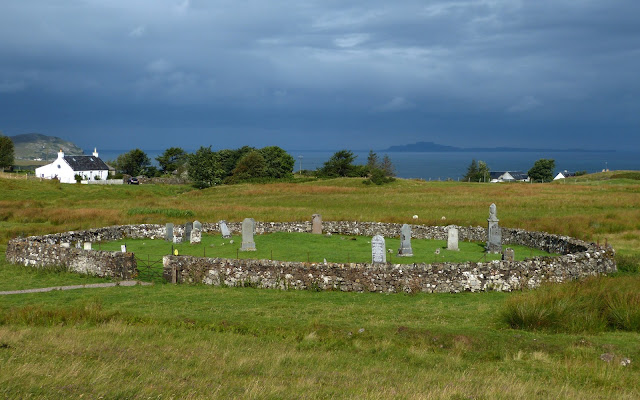 The name Kilmory refers to the church that once stood there, Cill Mhoire.  This is said to have been associated with the walled churchyard, pictured above, which contains carved tombstones which are believed to be very old - though they are difficult to find today.  However, one long-time resident of the township told me that she did not believe that the churchyard was at all old. 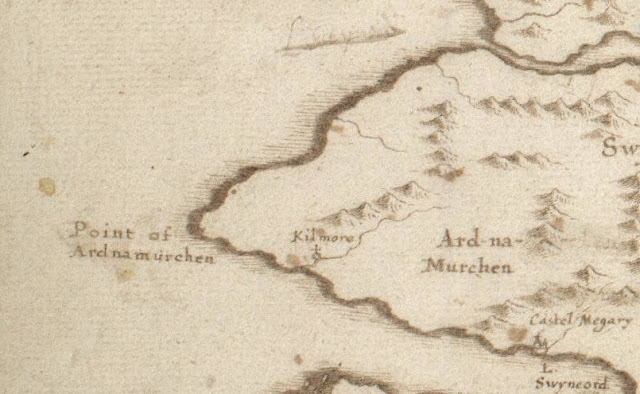 The earliest record I can find that records Kilmory is on a map dated 1636-52, draw by Robert Gordon and titled 'Straloch's mapp of Scotland and The West coast from Glen Elg to Knap-dail'.  Kilmory is marked on the south side of Ardnamurchan, roughly where one would expect Kilchoan to be, with 'Castel Migary' to its east.  It may be that this is Kilchoan. 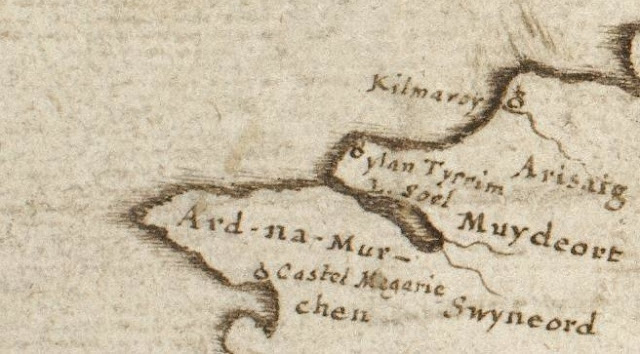 Kilmory in those days must have been a highly mobile settlement, as 'Kilmaroy' is shown in a different place in another map by Robert Gordon, of a similar date to the first, entitled 'A map of Scotland, north of Glenmore in detail, and outline of the east coast to Dunbar, showing the courses of the chief rivers, and the positions of a few places'.  Again, it may be that this is not Kilmory.

It's back on the south side of Ardnamurchan in 1654, in a map which very much resembles the first, published in 1654 by Joan Blaeu - though Robert Gordon also had something to do with its surveying.

In 1727 a survey was carried out by Sir Alexander Murray of Stanhope.  Called 'The Anatomie of the Parish and Barony of Ardnamurchan and Swinart', it included a  table in which he listed details of all the Ardnamurchan clachans.  'Kilmorrie' population included ten men, ten women and eight children, a total of twenty-eight souls in eight families.  The land was valued at '4 Penny-land' - compare this to Achateny, 6, and Achosnich, 9 - and the area of its land was given as 1100 acres.  For its souming - the number of animals it was permitted to keep - it was lumped in with 'Swardilchorach', the totals being 108 'cowes', 27 horses and 108 sheep.  Its 'Natural and Uncommon Product' was given as 'Sea Ware' (seaweed used as fertilizer) and Limestone.

The first map to show Kilmory in its rightful place was published in 1733.  Termed 'A plan of Loch Sunart', it was surveyed by Alexander Bruce and Richard Cooper. 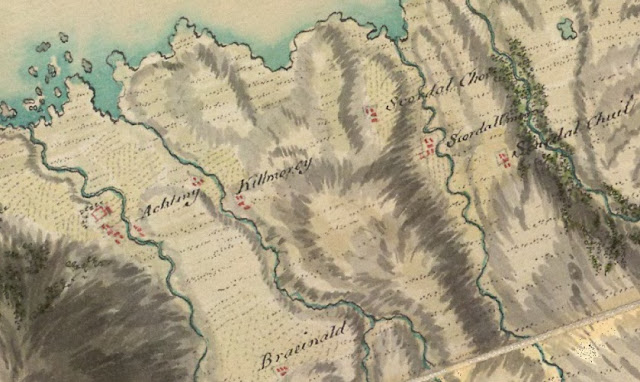 Roy Military Survey of Scotland, 1747-1755, shows 'Killmorey' clearly, though well back from the coast.  Roy's map was a masterpiece for its time but, while it's possible to infer something about the relative sizes of the settlements, it would probably be wrong to think that Kilmory in those days consisted of three houses. 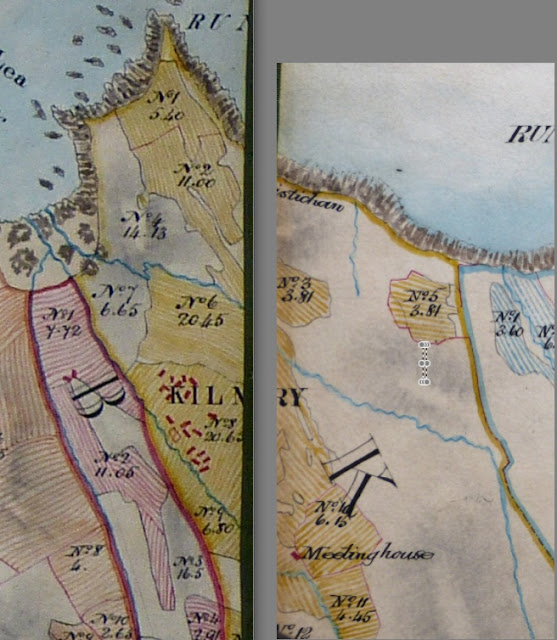 Kilmory is unfortunate in being located on one of the joins of William Bald's superb map 'Ardnamurchan and Sunart the property of Sir James Milles Riddell, Bt.', published in 1806 on a scale of 1:11,600.  It shows considerable detail of Kilmory, marking seventeen buildings and what may be a walled enclosure, though the accuracy of the number and position of the buildings is in some doubt.  Interestingly, he marks a 'Meeting House' to the southeast of the clachan.  His survey of the fields is remarkably accurate, and shows that Kilmory was a typical clachan at the time, a small, nucleated settlement with its commonly-held arable fields surrounding it.  It also had a large amount of common grazings, which extended south half way across the peninsula.

At the time, the Ardnamurchan estate was losing money, which was one reason for Bald's survey.  While Bald only made a detailed inventory of the land, the following year Low reviewed Bald's work with suggestions as to what Sir James should do with the lands he owned.  He listed the Kilmory acreages as follows -

Donald McKay must have been the tacksman for Kilmory.  There is no evidence from within Low's document for the clachan's population.  However, Low added the following comment -

In the reorganisation of his Ardnamurchan Estate that followed, Sir James Riddell did not clear Kilmory and amalgamate it with Branault as suggested, preferring to use Kilmory, at a later date, as a haven for the people of the many clachans he did clear in the years following 1828. 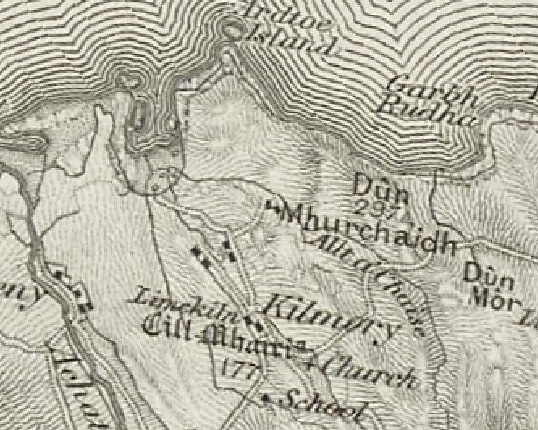 The first OS map, dated 1856, shows Kilmory reduced to no more than eight buildings and a church.  Just to the northwest of the church is what might be a small enclosure, and this might be Cill Mhairi, the walled graveyard.  By this time the settlement had been reorganised as a crofting township, and had accommodated, and perhaps already lost, people cleared from the three Swordle clachans.

The school is an important addition, but it is not the school which existed later in the present School House on the borders of Branault and Kilmory. 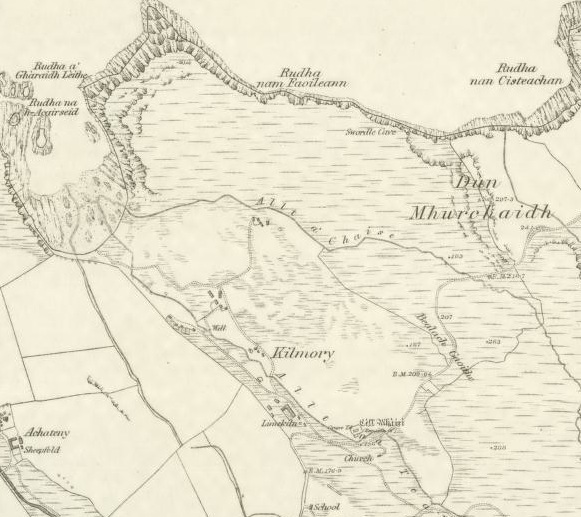 The next OS map, surveyed in 1872 and published in 1875 on a 6" scale, shows a much-recovered settlement, with 23 buildings and the church.  For the first time, the walled graveyard, Cill Mhairi, is shown, along with a well and a limekiln. 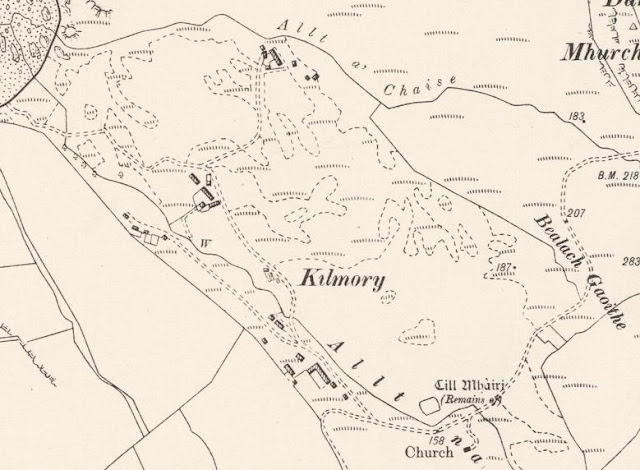 The OS 6" map was revised in 1897, and shows little change.  It does, however, mark the extensive areas of rough land within the crofting area. 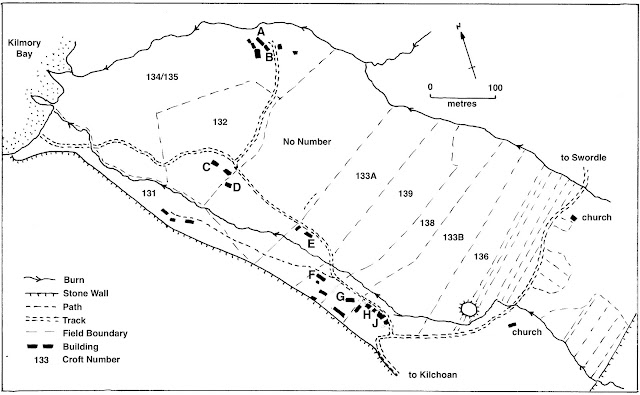 This map shows Kilmory's croft lands.  At the time of the map Kilmory had eight crofts, each of which had a main area of arable land.  However, since this was of generally poor quality, the best land, at the southeastern end of the township, was divided into thin strips and allocated between the crofts.  The map is taken from the booklet by Joey MacKenzie, whose family lived in the township after being cleared from Swordle Corrach.  The booklet, which describes Joey's life in Kilmory as a girl in the 1930s, is available in Kilchoan shops. 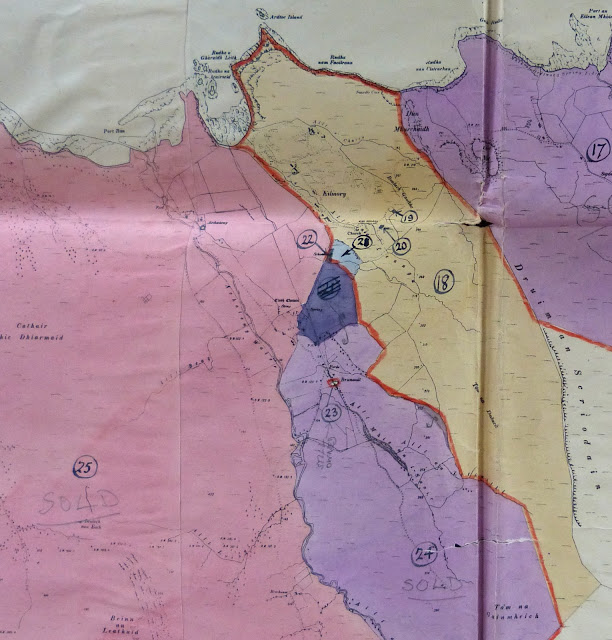 In 1948 large areas of the existing Ardnamurchan Estate were parcelled up by its then owner, Lord Trent, for sale.  In the map that was included with the sale prospectus, Kilmory is lot 18. 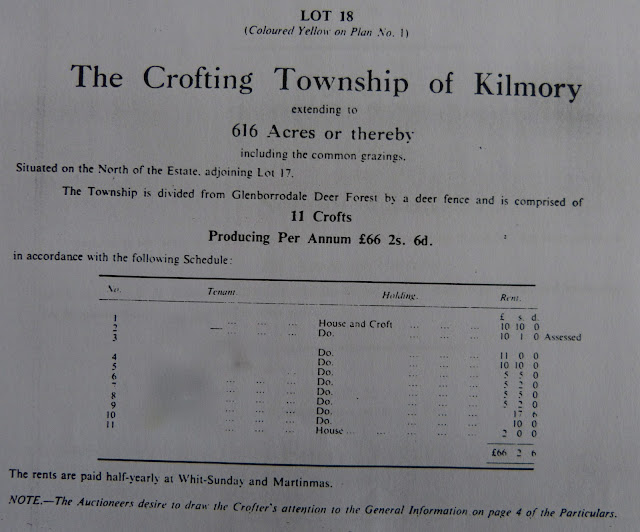 This page, also from the sale details, lists the annual income from the eleven crofts.  The names of the tenants have been removed. 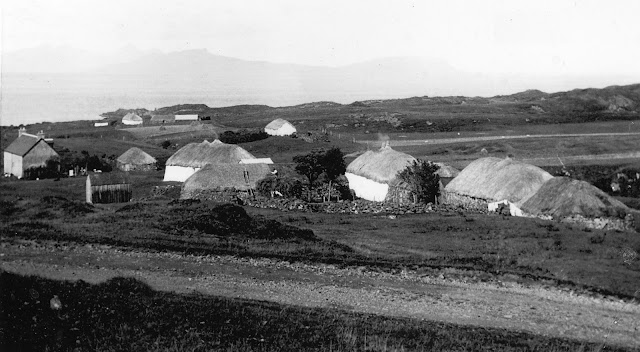 This and the next two pictures were all taken in the 1920s, and they show different views of Kilmory.  At the time, most of the houses were still occupied, and the croft fields were still being worked. 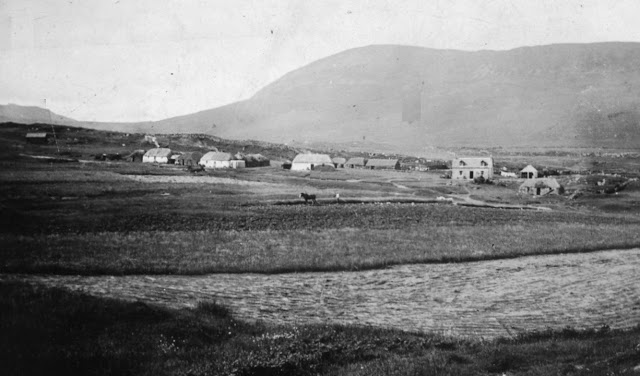 The horse in the centre of this picture, called Dan, was used for most of the heavy work on the crofts.  More details are available on the West Ardnamurchan Vintage Photograph site, here 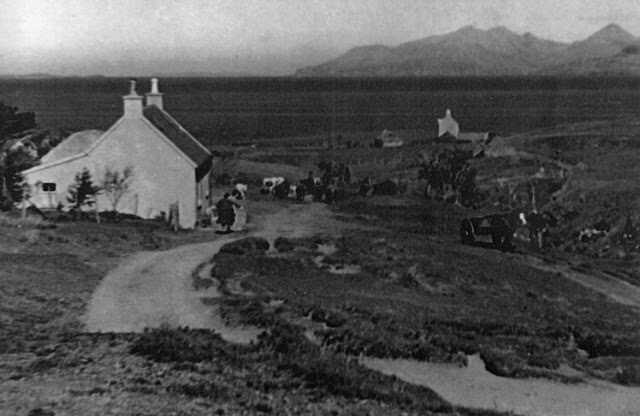 This picture was also taken in the 1920s, with Rum in the background.  More details about this picture can be found on the West Ardnamurchan Vintage Photograph site, here. 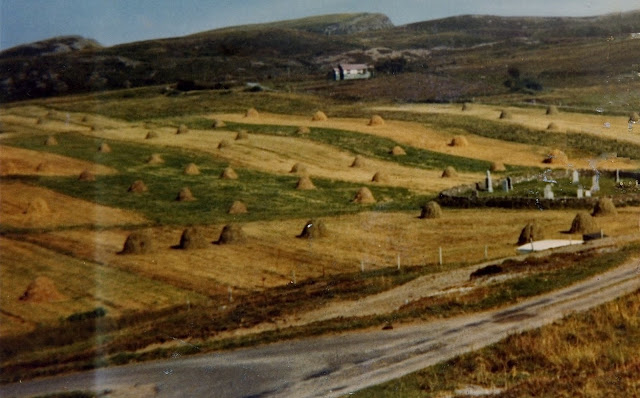 This early colour picture of Kilmory is important since it shows the old Free Church building that used to stand along the road towards Swordle.  The walled graveyard is visible to the right, and the Church of Scotland building, now a private house, is off-picture away to the right.

Many thanks to Mary Khan, Joey MacKenzie and others who have helped me with this history and loaned me maps and diagrams, may of which are reproduced above.  I am indebted to Donald Houston at Ardnamurchan Estate for his help with Bald's 1806 map and the details of the 1948 sale.  The earlier maps can all be viewed at the National Library of Scotland's website, here, except for the 1856 map which is here.