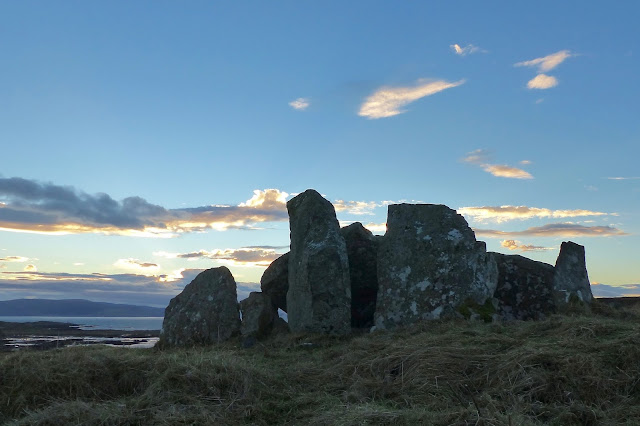 The idea this morning was to walk up from the shop to the chambered cairn in Ormsaigmore called Greadal Fhinn and take pictures of it against the rising sun, something which seemed fairly straightforward in principle but proved difficult in practice as the brightness of the sky reduced the stones to a black silhouette. 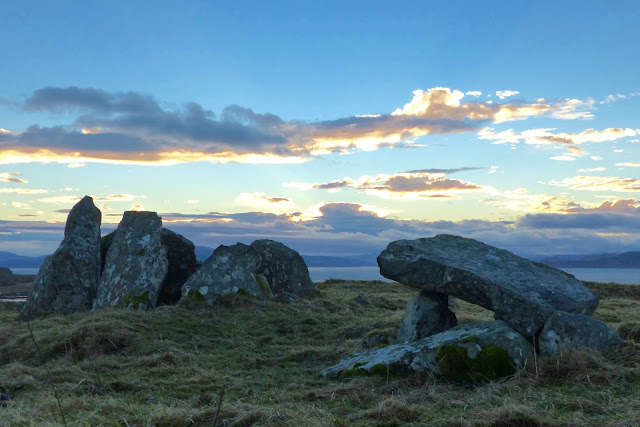 There were two chambers within the cairn, a larger one near the southeastern edge which was a passage grave, accessible from the outside (left), and a smaller central cist, right, both of which would have been covered in a great mound of rock and soil. 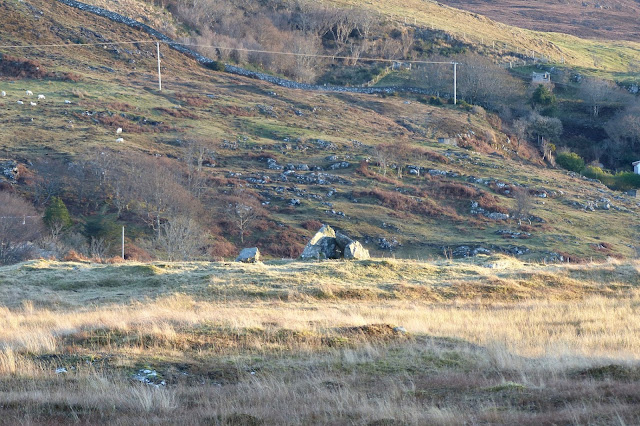 From the west, the size of the mound, some twenty metres in diameter, is visible. When it was first built, some 6,000 years ago in Neolithic times, it must have been an impressive sight. 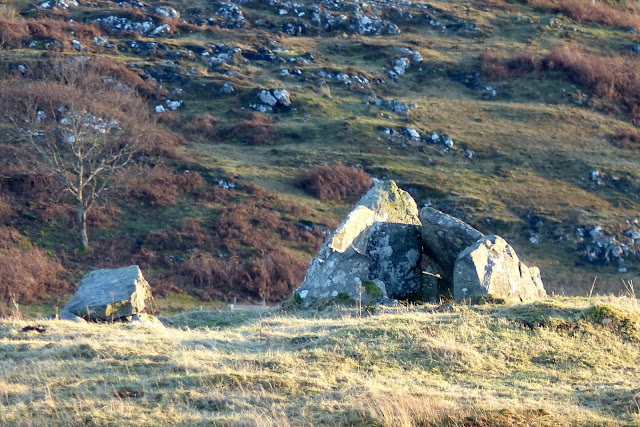 In this close-up, the cist is to the left and the passage grave to the right. There's more about this scheduled monument here. 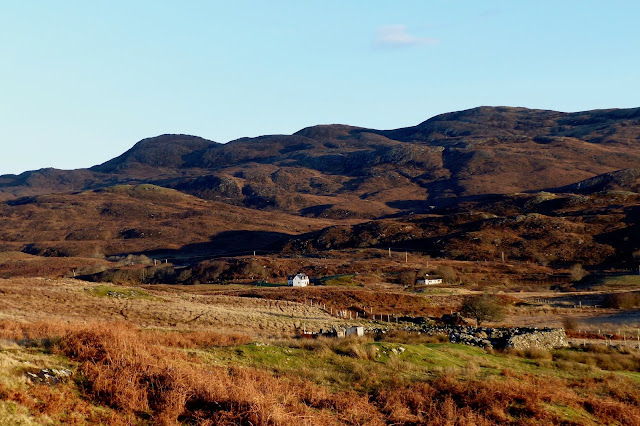 With the sun up and the colours in the hills spectacular, it seemed a shame to head home so I started climbing into the hills at the back of Ormsaigmore. This picture looks east, across the Sanna road on the outskirts of Kilchoan, with the high ground around Meall an Tarmachain in the background. In the right foreground is the stone sheep fank which is on Ormsaigbeg common grazings. 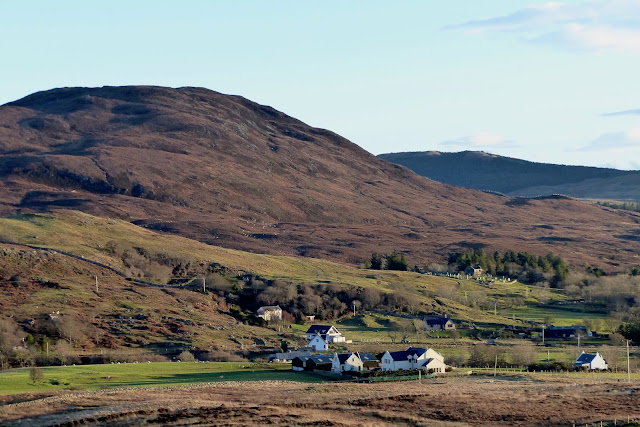 This is taken from higher up, the nearer houses being in Ormsaigmore and the further in Kilchoan, with the ruined church of St Comghan's in the right middle distance; the hills behind are Glas Bheinn, left, and the tree-covered Beinn nan Losgann, right. 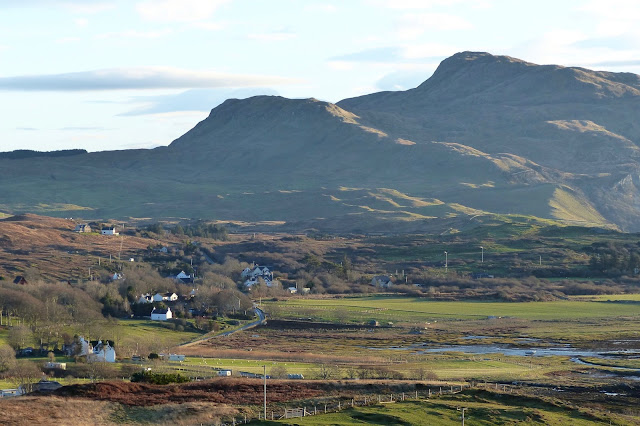 From higher still, this view is across to the main part of Kilchoan township, with the mudflats at the back of Kilchoan Bay at right, and Beinn na h-Urchrach and Ben Hiant rising behind, while.... 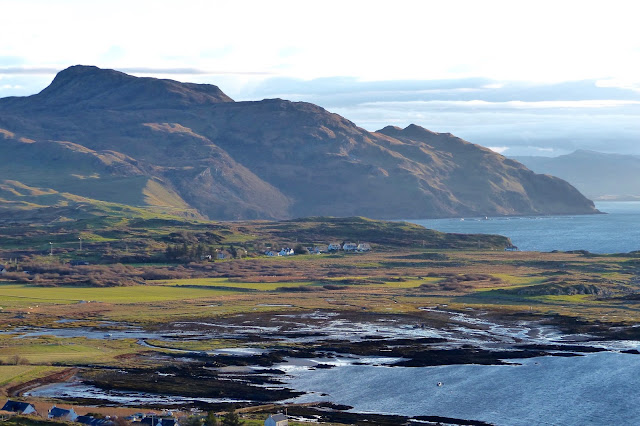 ....this photograph looks further to the right, across the bay to the houses in Pier Road and, in the right distance, the headland called Maclean's Nose. 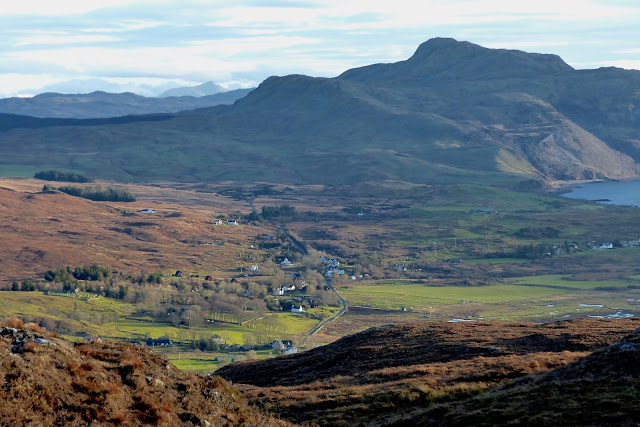 It was such superb morning that what has been planned as a gentle stroll became serious hill walking, climbing higher and higher towards the ridge line of Druim na Gearr Leacainn at the back of Ormsaigbeg, the views becoming hazier and more distant all the time until.... 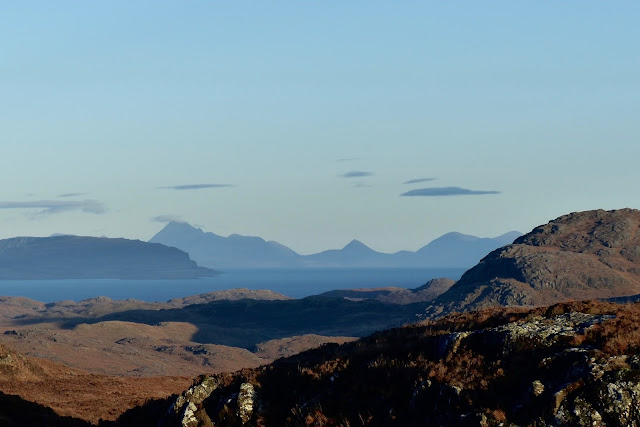