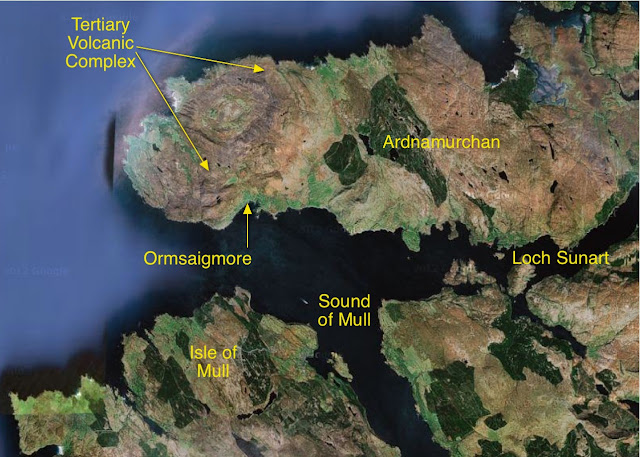 The landscape of the western end of Ardnamurchan is controlled by its geological history.  The Tertiary Volcanic complex and layered Jurassic limestones which underlie the area have been deeply eroded by westward-flowing glaciers.  These gouged deep valleys which were later flooded by the sea to form sea lochs such as Loch Sunart.  Low-lying areas like Ormsaigmore were subjected to periglacial and fluvial processes which further moulded the landscape, and provided the basis for a soil profile. 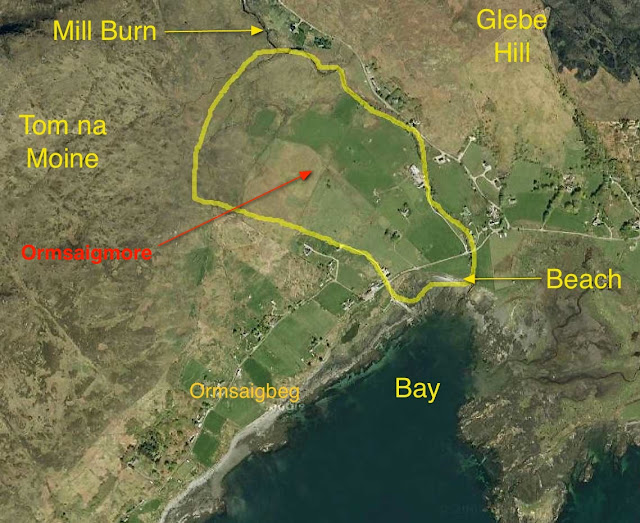 Ormsaigmore looks south onto a shallow bay with a small, protected beach.  With seabourne transport historically so important in the area, Kilchoan Bay was, until the 1940s, the local population’s main point of arrival and departure.  Not surprisingly, therefore, the Ormsaigmore settled area is just behind the beach.

To the northwest the hill called Tom na Moine rises steeply, while the northeastern boundary is formed by the Mill Burn, beyond which rise the heights of Glebe Hill.  Ormsaigmore therefore lies in a natural bowl of land, with the sea to the south. 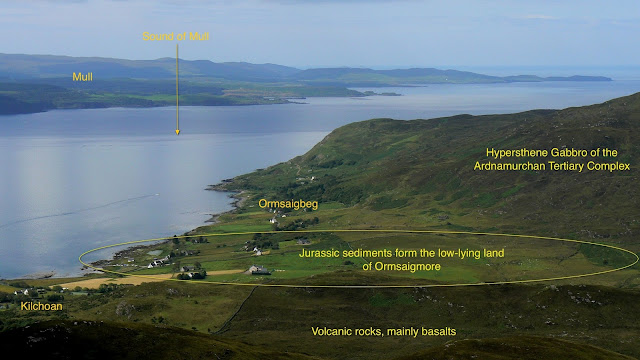 The richer soils in the centre of this bowl lie on Jurassic sediments.  Where these are cut by harder volcanic 'cone sheets', which form low, elongated ridges across the croft land, the soil is shallow and, in places, bare rock protrudes.  The surrounding hills have acidic, peaty soils.  Today they support heather and rough grass, but in Palaeolithic times these steep slopes may have been covered by forest.  While most of this is lost, some forestry remains on the steeper, south-facing slopes of neighbouring Ormsaigbeg, where there is evidence that some stands of trees are over a thousand years old. 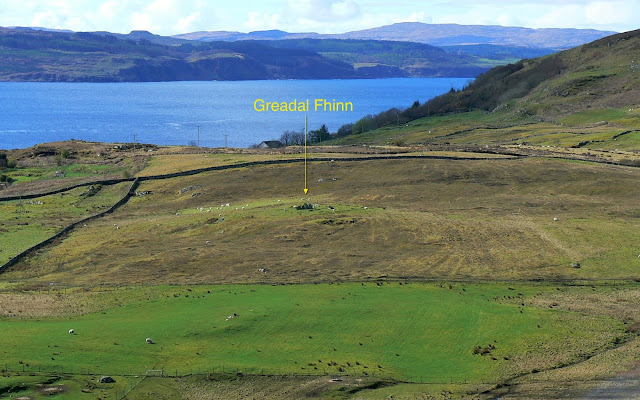 Some 6,000 years ago, the protected landing place, and the relatively good soils of the land behind it, attracted Neolithic settlers.  No trace of their occupation remains except for a chambered cairn.  This stands on a knoll in the centre of the Ormsaigmore ‘bowl’, a feature formed by an outcrop of one of the larger cone sheets. 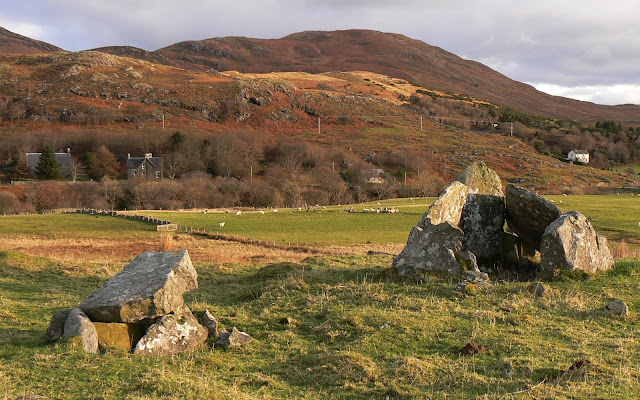 The remains of the cairn are roughly circular, with a diameter of approximately 20 metres.  The cairn may originally have been formed of stones, but these have since been removed, probably to use as building materials, exposing two burial chambers.

At the centre is a cist grave (left in the picture), with a passage grave in the southeast quadrant.  The cist grave is rectangular in plan, and formed of four upright slabs covered by a cap stone which has slipped.  The entrance may have been through a narrow gap in the southeast corner.  The chamber of the passage grave is formed of five uprights and one remaining cap stone, while the passage is formed of two vertical slabs.  There were more slabs but they, along with the rocks that formed the cairn, have been taken as building materials. 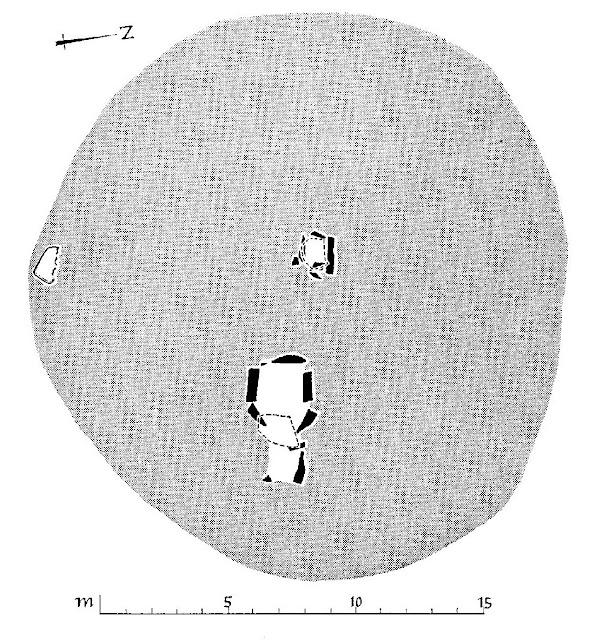 This plan of the cairn is taken from Ritchie’s paper on his excavation of a similar cairn at Achnacreebeag, near Oban.  It too has both cist and passage graves, the latter also opening southeastwards.  From the artefacts found, Ritchie was able to date the structure but was not able to suggest whether the two chambers were built at the same or different times.   They are part of a family of many cairns, of varying design, in the Lochaber and north Argyll area.

It seems likely that the Ormsaigmore cairn was surrounded by a number of kerb stones.  A large, recumbent stone on the south side may be one of these. 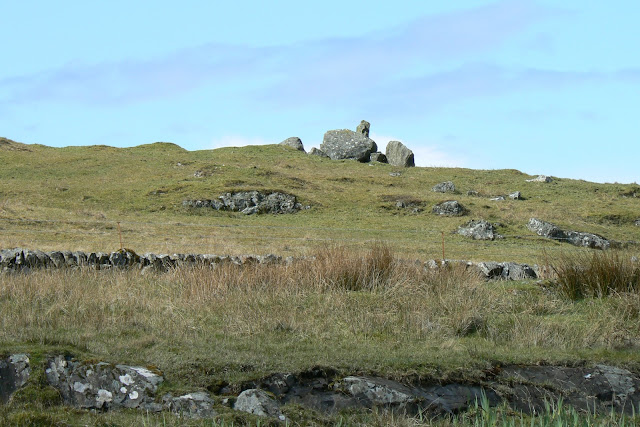 The knoll isn’t high, yet its location at the centre of the farming land means that it dominates the inhabited area, visible both across the worked land of Ormsaigmore and to boats passing in the Sound of Mull.  This view looks up to it from the probable site of the original Ormsaigmore village.

The cairn may therefore be seen as making a statement.  This is a confident community, a pioneering society that has cleared forest and created farmland, yet has the energy and resources to do more.  It suggests that the living in Neolithic times was good.  Yet it was an outward-looking community: that the cairn has the same design as others at some distance suggests there were good cultural and trading links.

Confusingly, the cairn is known as Greadal Fhinn.  Local lore has it that the ‘Fhinn’ refers to a Viking chieftain Keitell Flatnefr of Raumsal, and that he was buried here.  This Viking was known on the west coast as Caithil Fin.  In 888AD he fled Norway and, according to the Sagas, settled on the west coast of Scotland, where he later died.

Further evidence that the area was settled in Viking times comes from the name:  Ormsaigmore is derived from the Norse words ‘ormr’, a snake, and ‘vik’, a bay, the word ‘more’ being Gaelic. 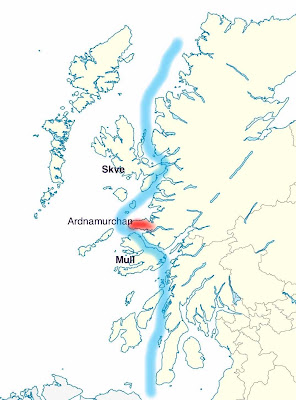 As the Vikings well appreciated, the Ardnamurchan Peninsula holds a pivotal position astride the sea route along the Scottish West Coast. Ormsaigmore’s bay, as the most westerly anchorage on Ardnamurchan’s south coast, is very likely to have supported the same sort of Viking settlement as was found during the summer of 2011 around the Viking boat burial on the north coast.  Yet the Ormsaigmore Vikings, as in so many of the areas they settled, left no long-lasting legacy except in place names.

In subsequent years, a clachan - a small village - existed on the Ormsaigmore site.  We know that its population in 1716 was seven men over the age of 16.  Alexander Murray's survey of Ardnamurchan in 1737 found that it had a population of 29, grouped in six families comprising nine men, eight women and twelve children.  The total area of the 'tenement was 984 acres, and the 'penny land', a valuation of the productivity of the land for rent purposes, was stated as 4.  The pasture supported 48 cows, 12 horses and 48 sheep. 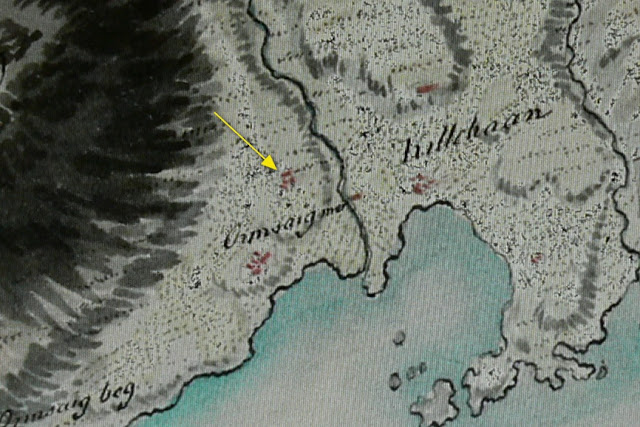 This map, drawn by William Roy between 1747 and 1755 [1], shows the location of the clachan, along with the neighbouring clachan of Ormsaigbeg - though the name 'Ormsaigbeg' is in the wrong place. 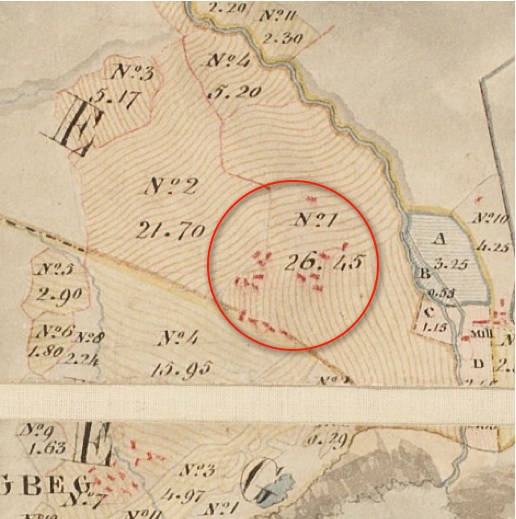 William Bald’s map of 1806 [2] shows the clachan in such detail that 18 buildings can be distinguished, along with a wall which separated the village from Ormsaigbeg.  Some of these buildings can still be traced on the ground.

The houses were built on the poorest agricultural land, in places where the hard dolerite rock of the cone sheets protrudes.  Between these are small areas of flat land, like terraces, which were cultivated. 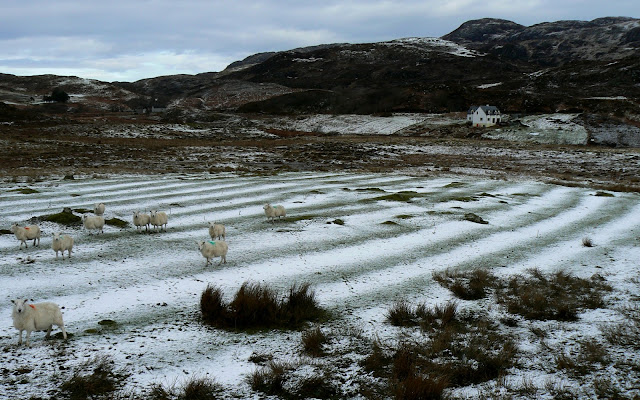 Bald’s map shows very clearly that the better agricultural land around the village was divided into four large runrigs, which are still visible on the ground.  Other areas of less easily worked land, articularly on slopes, show clear sign of lazy beds.  Along with the outlines of the walls of the clachan’s buildings, they are the settlement's principal legacy. 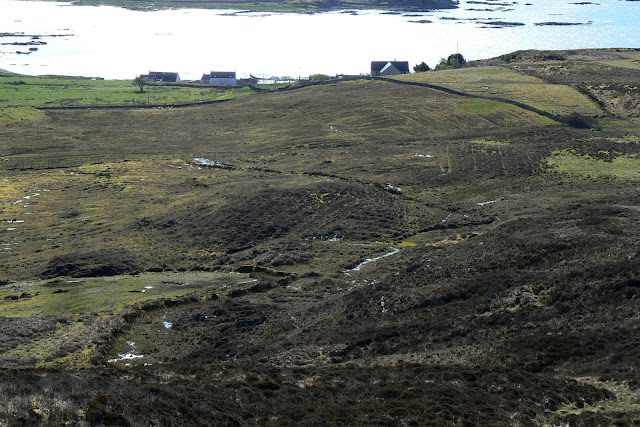 Some of these lazy beds extend upwards onto the lower slopes of Tom na Moine, land which has now been overtaken by heather.  These suggest that there were times when the population of the clachan grew beyond the capacity of the main fields to support it.  The answer was to expand onto marginal land: this says something about the society’s limited ability to innovate in response to crisis. 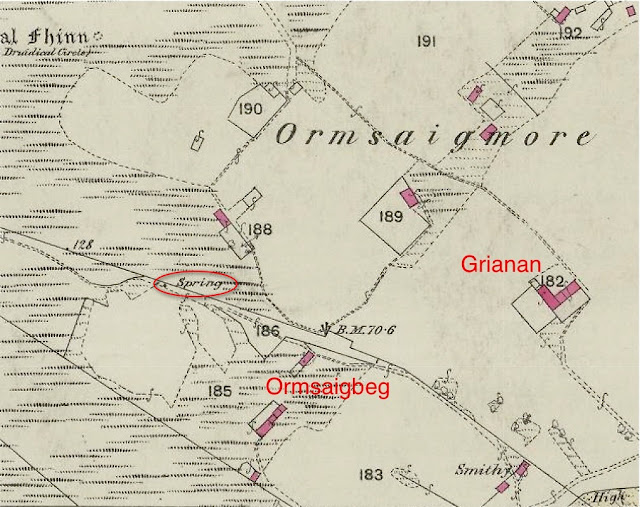 The OS 6” map of 1875 [3] shows a radically changed landscape.  The buildings of the clachan have largely disappeared, cleared to make way for a single, large sheep run.  This clearance, by Ardnamurchan Estate, the landlord, took place around 1832.

The new sheep farm covered the whole of the old clachan’s land.  The amount of ‘improved’ land was reduced, and the sheep would have been run on the runrig and common land in the hills to the northwest as well as within Ormsaigmore itself.  With the exception of building 182, Grianan, which was the farmer’s house, all the roofed structures (in pink) were farm buildings such as byres or cottars’ dwellings.  Note that Greadal Fhinn is referred to as a ‘Druidical Circle’.

By contrast, the clearance of neighbouring Ormsaigbeg resulted in its present-day organisation of small crofts on narrow, individually-worked strips of land running from the common grazings at the back to the foreshore.  Some of the inhabitants of the Ormsaigmore clachan were moved to Ormsaigbeg.

An important feature of the 1875 map is the spring, marked in red.  This still runs today, and partly explains and dictates the sitings of the historic settlement. 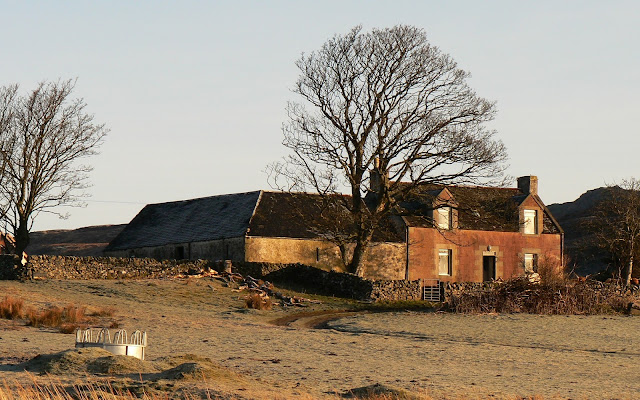 The farmer’s house, Grianan, reflects the spirit of the improvers who made these drastic changes to the West Highland landscape.  It’s a solid, substantial house, built of red sandstone imported from the south.  Adjacent are large barns.  These match the confident, straight walls which cut across previous agricultural features such as the old runrigs.  Yet in one way it conforms: it is built on the poorer agricultural land. 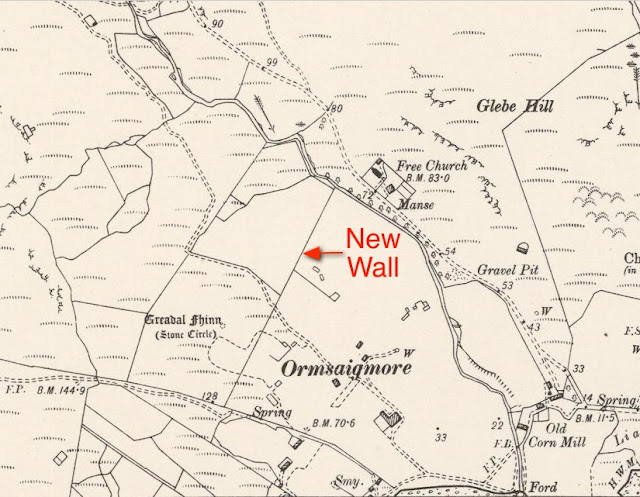 The OS 6” map of 1897 [3] shows few changes except that a new wall has been built along the northern side of the farm, the amount of improved land has increased, and the chambered cairn is referred to as a ‘Stone Circle’. 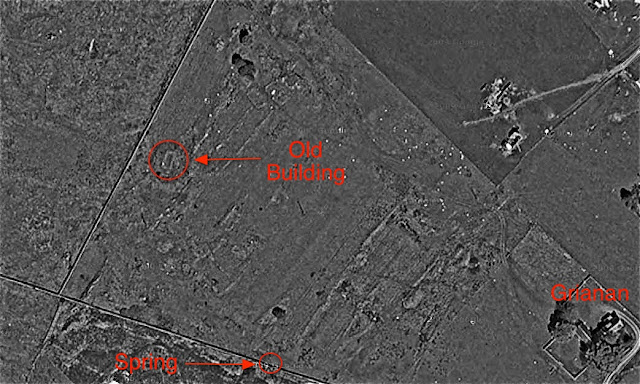 This enhanced Google image shows that the remains of several of the old buildings still exist on the ground.  A good example is the one marked in red, which is shown on the 1875 OS map and is probably an original clachan building. 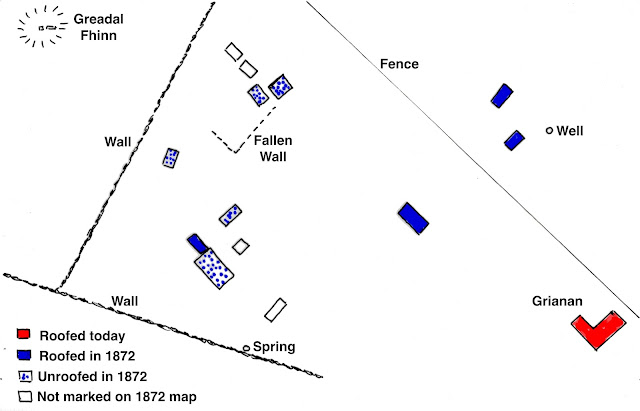 The author's survey of the ground traced a total of 13 structures, some of which might be the old buildings of the Ormsaigmore clachan, others the abandoned cottars’ cottages, farm buildings and pens of the post-clearance sheep run. 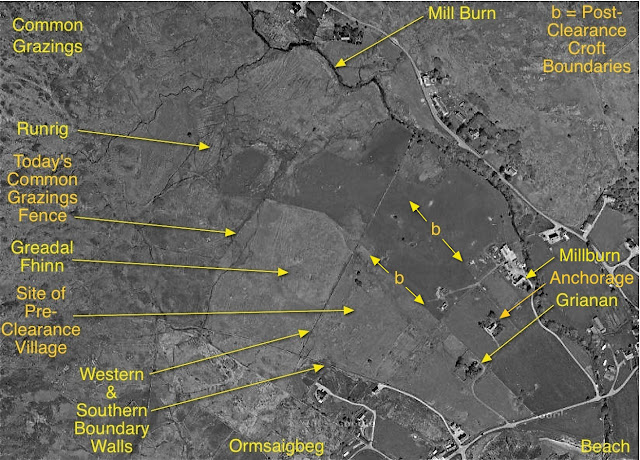 This shows the area today.  Following the Crofters’ Holdings Act of 1886, Grianan farm was divided into three crofts – Grianan, Anchorage and Millburn.  This did not take place until just before the First World War – Millburn croft house was built in 1922.  The boundaries of the crofts are marked with the letter ‘b’.  By comparison with the crofts in Ormsaigbeg, these are reasonably large, and include some good land.

It is important to note that the present-day buildings occupy the area of the old ‘clachan’, and that the most intensively-cultivated land remains the same as the best runrig fields.  In some respects, little, over the last 6,000 years, has changed.

[1] William Roy's Military Map of Scotland, 1747-55, by kind permission of the British Library Board.  View the map on the National Library of Scotland's website here.

[3] Ordnance Survey maps by kind permission of the National Library of Scotland.   View the maps here.