The Lamb and the Eagle 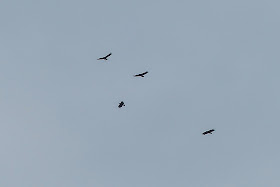 To see one eagle soaring across Scotland's skies is exciting enough, to sit and watch four is almost unimaginable, yet this is what a lucky group of visitors saw yesterday over West Ardnamurchan.  The eagles were sea, or white-tailed eagles, reintroduced into western Scotland in 1975 after becoming extinct in the early 1900s.

That we have so many eagles now over West Ardnamurchan is a tribute to the success of the reintroductions on Mull to the south of us and Rum to the north.  Today, Mull has 35 breeding pairs, and we're beginning to see them spread onto the mainland as they look for new territories. 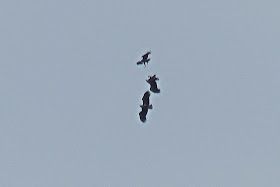 As if watching four sea eagles flying wasn't treat enough, the eagles began to perform a series of aerial manoeuvres, perhaps part of a mating display.  In this picture, one of the eagles is flying upside down, yet this bird is so big it's sometimes called a 'flying barn door'. 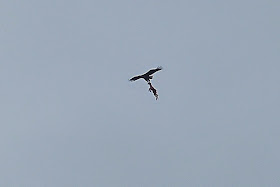 But the group witnessed, and were able to photograph, one of the consequences of the sea eagles' breeding success.  One of the eagles was seen carrying what is almost certainly a lamb. 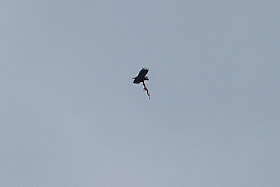 There have been reports from local farmers and crofters that the loss of lambs this spring has been the highest for years, and sea eagles are increasingly taking the blame.  It may be that this lamb was already dead, but no-one can pretend that an eagle can't kill a lamb.  Lambs are a farmer's livelihood, and the attachment between farmers and their livestock is strong.  Any pleasure in watching these birds must be tempered by the knowledge that it comes at an emotional and financial price.


Many thanks to the anonymous photographer for allowing the Diary to post these pictures.
Jon at 09:21
Share